How do you count years in your country? What year is it now, 2019? Yes, it is 2019 in Japan too, but it is also Heisei (平成) 31 and soon will be Reiwa (令和) 1 when Emperor Akihito steps down and passes the Chrysanthemum Throne to his son, Crown Prince Naruhito.

We use two calendar systems in Japan, and they are differentiated by the year of reference. The Gregorian calendar most of you are familiar with is called Seireki (西暦) in Japanese. The other calendar system used in Japan is Gengo (元号), which is based on an emperor’s imperial reign.

The Japanese imperial system currently follows Issei Ichigen (一世一元), meaning only one era name applies to the reign of each emperor. For example, Heisei started on January 8, 1989, a day after the previous Emperor Hirohito passed away, which ended the Showa (昭和) era. On that day, Akihito, who is the current Emperor, succeeded to the Imperial Throne, marking the start of the Heisei era. So, there were two eras in 1989; both Showa 64 and Heisei 1. Only the first 7 days are Showa 64 and the rest of the year is Heisei 1. Gengo calendars have no year 0. 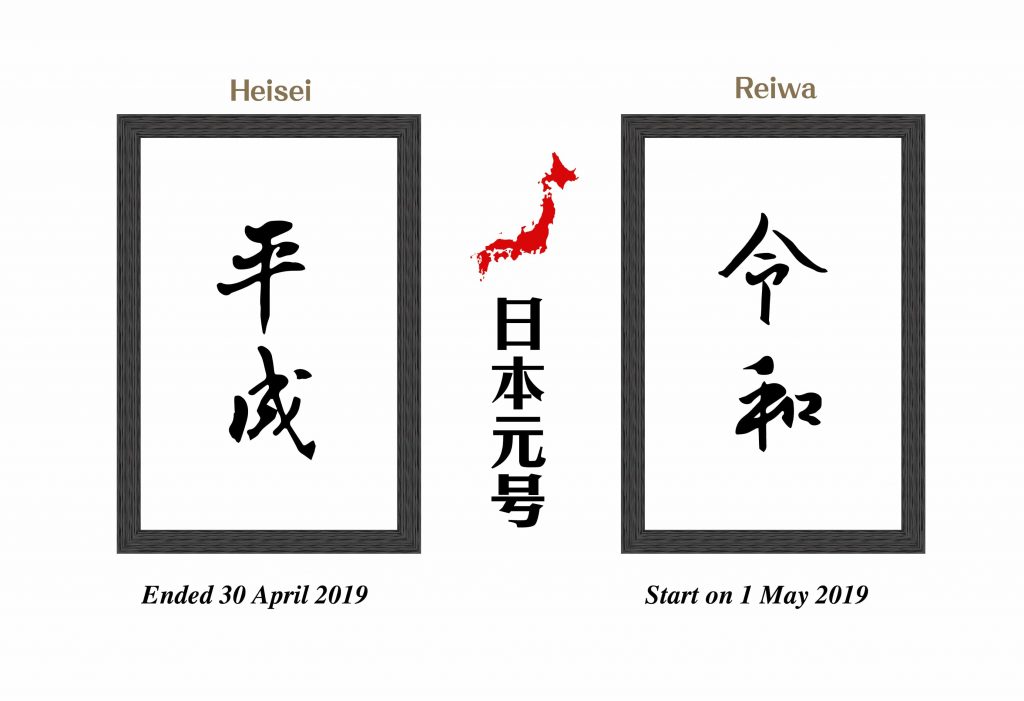 The Emperor Controls Both Land and Time

Japan adopted this rule from ancient China, where an emperor was thought to control not just land but time as well, and the rule is a holdover from the Meiji era (1868-1912). The history of era naming goes back to 645 when the first Japanese era Gengo Taika (大化) started, and there have been 247 eras up to Heisei.

The era name used to be changed more frequently such as after a natural disaster. The Gengo calendar system is currently determined by the Cabinet of Japan, the executive branch of government. Only the Emperor used to have the power to name a new era, however, with the 1979 enactment of the “Era Name Law,” the power shifted from the emperor to the Cabinet. A new era name is determined behind closed doors by private experts and chairpersons of the two chambers of the National Diet legislature.

As you can see in the change of Showa era to Heisei era, it’s likely that the government prepares their shortlist of candidates for next new era name in preparation for so-called Hogyo (崩御), the sudden demise of an emperor. However, this has never been confirmed officially since speculating on an emperor’s death is a huge taboo.

The Three Requirements for an Era Name

There are some requirements in determining Gengo:

If you have ever learned kanji, you can tell that those kanji characters that have been used as era names are relatively simple; Meiji (明治), Taishou (大正), Showa (昭和), and Heisei (平成).

Compare these with a complicated kanji, such as Nan ( 難 ), which literally means “difficult.” It has a far greater number of strokes than the kanji characters used for an era name.

Why Does Japan Use Two Different Calendars?

There was (perhaps still is) a debate that Japan should discard Gengo and only follow Seireki, especially considering that Japan is the only country in the world that uses Gengo today. However, Gengo is woven into people’s daily life. Gengo dates are used on driver’s licenses; bank books; coins and bills; New Year greeting cards called Nengajo (年賀状); administrative forms that you fill in at the city hall; medical history forms; train tickets, and much more! This is a part of the reasons why Gengo still exists today.

Also, Gengo is not only a way to count years, but it’s also a part of people’s identity. As a person who was born in the Heisei period, I often call myself Heisei umare (平成生まれ), as people call those who were born in the Showa period Showa umare (昭和生まれ). We will call people born after May 1, 2019, Reiwa umare (令和生まれ). This makes me feel very old, I’ll now be a person born in the previous era.

There is a sense of fellowship, of being close in age and going through both good and bad times during a specific era. People who were born in the same era often share the same memories and experiences, such as popular TV shows and songs, natural disasters, newly introduced technologies, and historical events such as witnessing a particular iconic Olympic event.

The change of Gengo affects many aspects of Japanese society, especially city offices, programmers, and calendar makers. In a 2016 televised address to his people, the 85-year-old, Emperor Akihito announced his intent to abdicate, so-called Joi (譲位), saying his age and fitness level could make it difficult to carry out his duties. By stepping down, he hoped to make the transition easier both for his family and for the Japanese people.

Akihito is the first Japanese emperor to abdicate in 200 years. Reiwa, the new era name, was announced on April 1, 2019, one month before the start of Crown Prince Naruhito’s reign.

There have been many TV shows and articles that look back on the Heisei era. Japanese reactions have been positive as far as I have seen and heard. Guessing the new era name became a cultural event with people tweeting their guesses. After the announcement of the new era name,  Reiwa became a trending word on Twitter.

May 1, the first day of Reiwa will be a holiday this year creating a “Golden Week“, which is a collection of four national holidays within seven days. Including the weekend people will have up to ten days of vacation! Japanese will be celebrating the first day of the new era in their own way, such as going home to visit their parents or enjoying a family trip.

After the government announced the new era name, the news spread all over the world. Each era name represents an ideal for the era. For example, Heisei; Hei (平) means “peace” and Sei (成) is the root of the verb “to become,” meaning “achieving peace” altogether.

Many of the previous era names were drawn from classic Chinese literature works, but Reiwa was drawn from “Manyoshu,” which is Japan’s oldest existing anthology of poetry. Reiwa can be translated in various ways and there is some confusion about its meaning. This is due to the fact that one kanji often has multiple meanings depending on the context. Therefore, the Foreign Ministry declared that the English translation of Reiwa is “Beautiful Harmony.” Prime Minister Shinzō Abe said Reiwa suggests a “culture born and nurtured as people’s hearts are beautifully drawn together.”

We have seen and experienced so many things during the 31 years of the Heisei era, from Japan’s first appearance in the FIFA World Cup, to the Great East Japan earthquake. Nobody knows what the Reiwa era will bring, but we are very excited about the new era hoping that our culture keeps blooming beautifully and we will be able to share the harmony with the world.

Dig deeper into the beauty of the Japanese language and culture with Pimsleur Japanese Language Lessons!