Nuremberg (Nürnberg in German) may be infamous for the World War II war crimes tribunals and hosting massive Nazi party rallies, but there is much more to this Bavarian city than that! It also has more breweries per square capita than anywhere else, a charming medieval old town, teeny tiny little sausages, and a beloved Christmas market. It might not be on your list as a top city to visit in Germany, but maybe it should be! Here’s how to spend a weekend eating and drinking your way through the city – and, through history.

Traditional Nürnberger bratwursts, like all good things in life, come in threes. And they are dainty little things! Turns out that to be a proper Nuremberg brat, these sausages must be no longer than 9 centimeters and weigh less than 25 grams. They’ve been prepared this way for over 700 years. Legend has it that they are so small because, during the medieval plagues, fear of infection made it too dangerous for people to leave their homes to buy food. One enterprising sausage-maker finally figured out you that if you made sausages a certain size and shape, they were slim enough to fit right through the keyholes of the plague-infested doors – and boom, the Nuremberg sausage was born. Present day, these baby brats are served two main ways: three to a bun, sandwich-style, with mustard; or sizzling in neat little rows on a metal plate with a heaping side of sauerkraut. They are flavored with salt and marjoram, and you can find them all over the city. 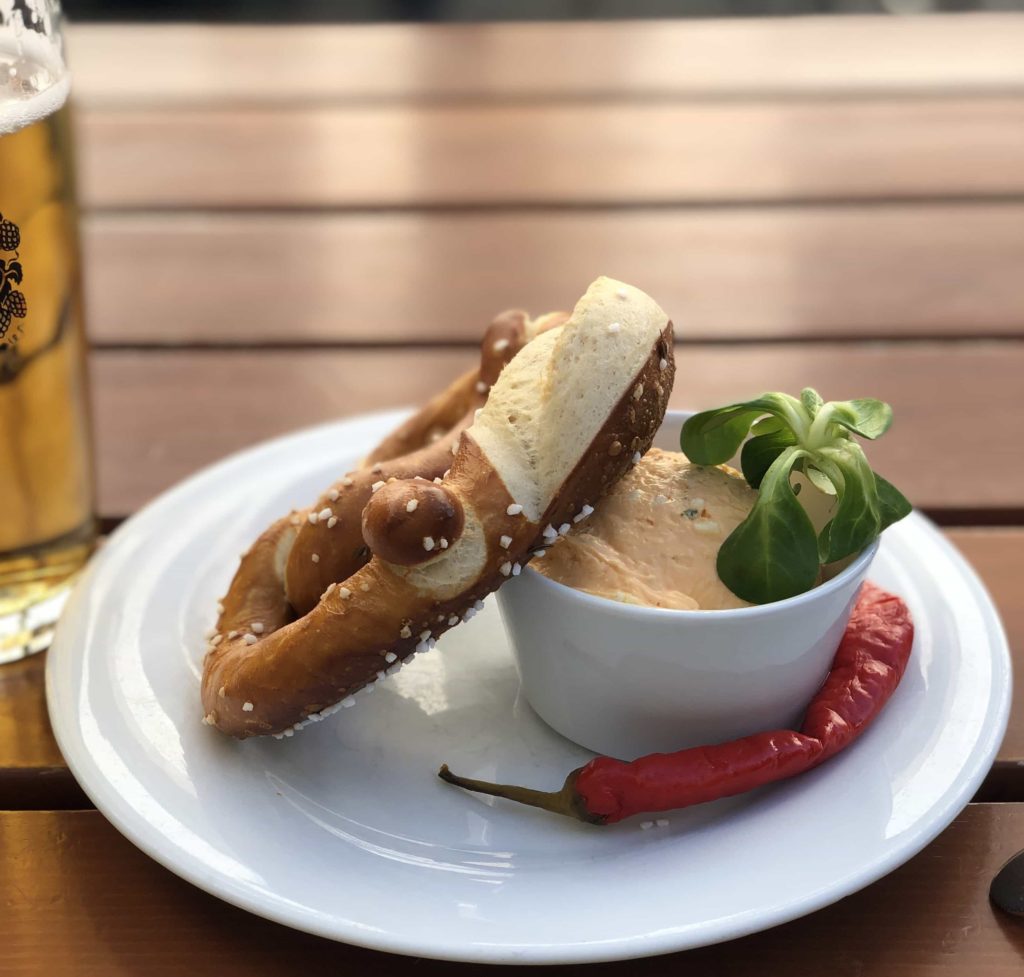 A favorite culinary discovery of mine was obatzda: a rich Bavarian specialty made from butter and aged soft cheeses, like Camembert or Romadur, colored pinky-red from generous amounts of paprika. You spread it on slices of dense brown bread (or pretzels, or pumpkinseed bread. The type doesn’t matter as much as the freshness, as day-old bread is somewhat of an offense to Bavarians) and top it with crunchy raw onions. You can buy obatzda in shops and grocery stores all over, but the tastiest versions are served in biergartens (beer gardens), as they add a bit of stout beer to the recipe. It’s true, beer makes everything better.

And speaking of beer, it’s a given. In this part of the world, it’s practically a religion. The Bavarians are serious about their beer. In fact, in order to be labeled as bier, it must be brewed according to the Reinheitsegot (literally, the “Bavarian Beer Purity Law”), which only allows the three ingredients: water, hops and malt. It’s been brewed this way for centuries. While Munich is sometimes seen as the beer capital of Germany, Franconia (Nuremberg’s region) has an equally strong and distinct brewing tradition. Any type you order will be delicious, but start with the Red Ale – it’s a Nuremberg classic. Zwei Bier, bitte! (Two beers, please!).

If beer isn’t your thing, allow me to introduce you to the shorle (spritzer) style drinks. This isn’t specific to Nuremberg, but a common summer drink in Austria, Germany and Switzerland (the German-speaking “DACH” countries). It essentially means adding sparkling mineral water to a juice or wine, creating a spritzer or natural soda. Apfelshorle, made with apple juice, is probably the most popular, but there is nothing better than a crisp Weinshorle made with a dry German Riesling. Almost more refreshing than a cold beer on a hot day, and you even get the extra benefit of a little hydration. Forget Aperol spritz, this might be your new European summer drink of choice. It certainly is mine. Prost (cheers)! 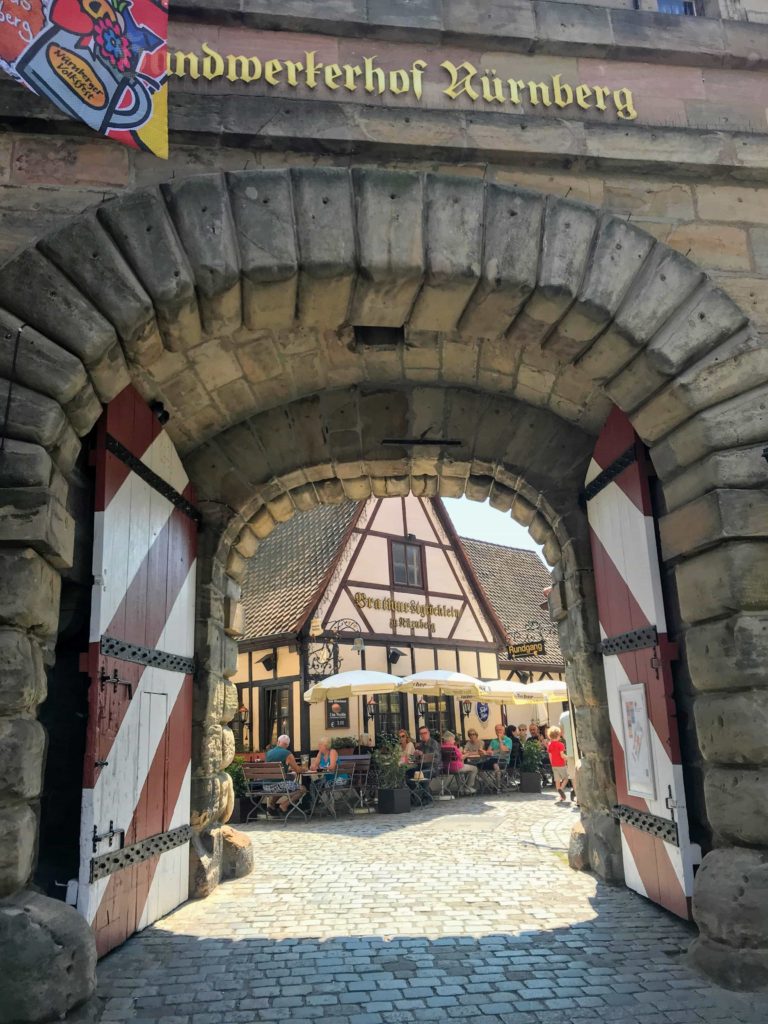 Nuremberg’s Altstadt (“alt” meaning old, and “stadt” meaning city. Old town!) is beautiful and small enough to easily explore on foot. The entire old city is walled, with running paths around the perimeter and a few rivers cutting through the town. Once inside, don’t miss the truly lovely Weissgerbergasse, famously the prettiest street in the old town. Quaint rows of half-timbered houses lined the street, wearing their colorful wood frames on their sleeves, most with well-tended flower boxes perched on the windowsills, pretty as a painting.

As you wander through the medieval city, look for the “prayer boxes” on many of the buildings.  They are the large boxes that jut out of a window, built so that a person would be technically on the outside of the house while praying, and thus closer to the sky and to God. 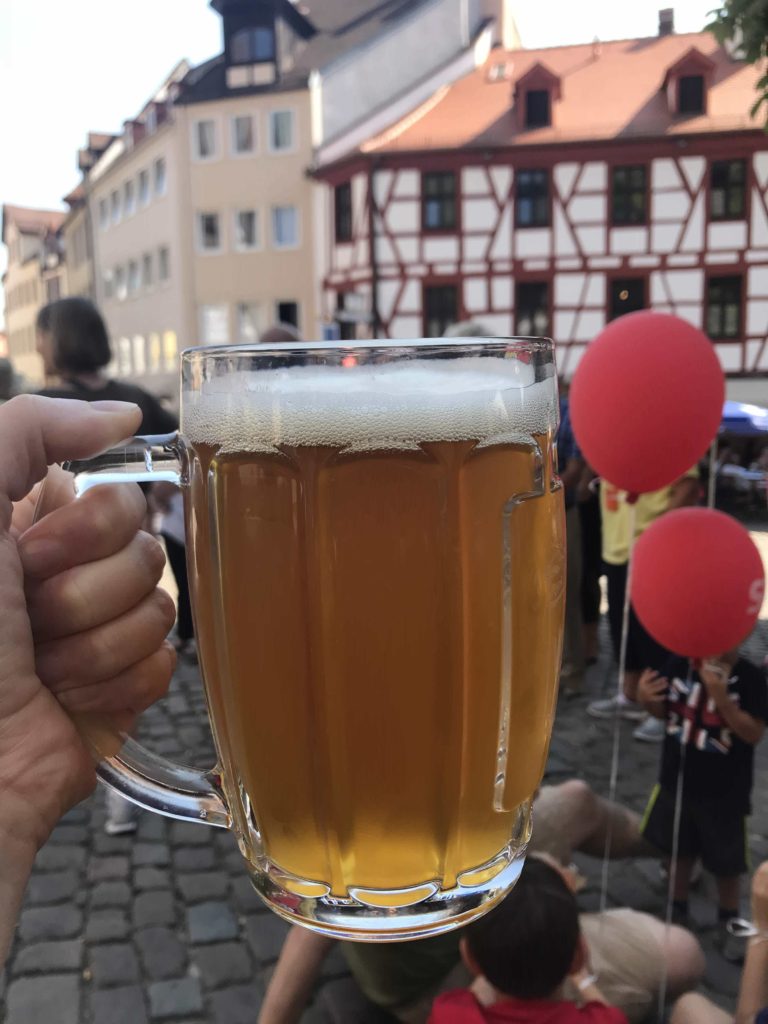 In the heart of Altstadt, the bustling Hauptmarkt (main market) is the place for daily street markets, or during the holiday season, the famous Christkindlsmarkt (Christmas market). The Hauptmarkt is also home to the striking Gothic Frauenkirche (Church of Our Lady) and the Schöner Brunnen (beautiful fountain), a gorgeous 14th-century fountain. Spin one of the two brass rings adorning the fountain for good luck.

If you make your way up to the Kaiserburg Nürnberg (Imperial Castle of Nuremberg), you’ll be treated to a view that looks out over the brown roofs, blue church spires and walls surrounding the city. End your explorations as the locals do: with pints of Franconian beer in the small plaza adjacent to the Albrecht Dürer house. 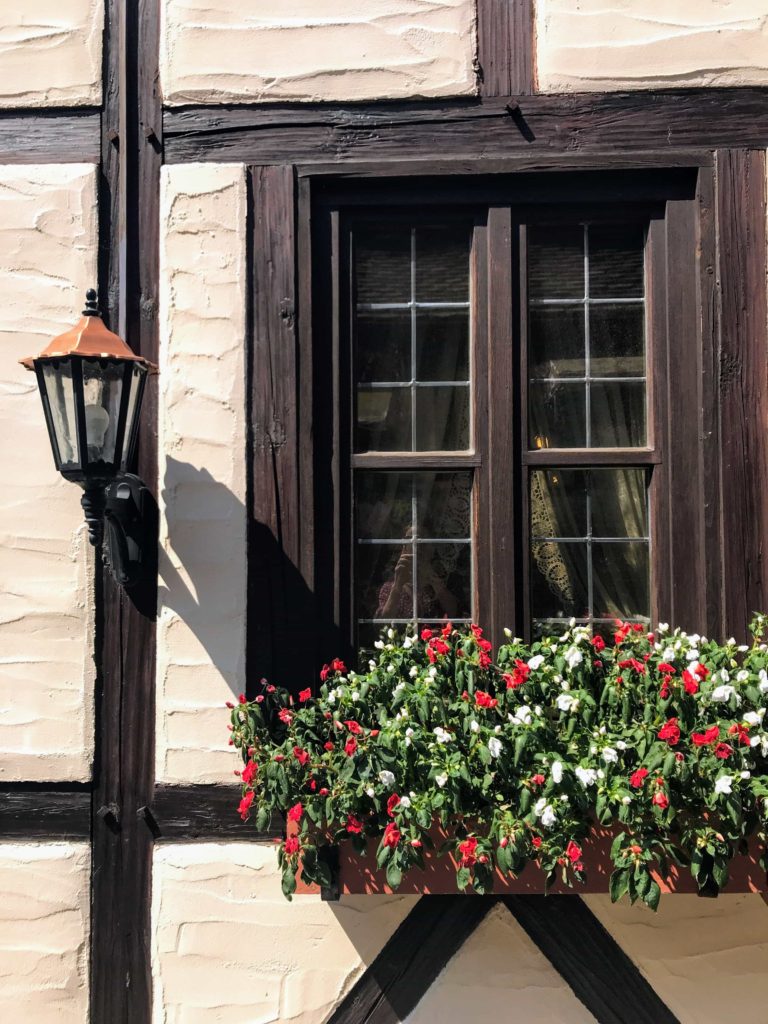 It’s worth noting here that much of this medieval ambiance is a reconstruction, rebuilt from ruins in the 1940s and 1950s. Nuremberg was the “most German” of all the cities in Germany, the ideological center of the Nazi party, and Hitler’s favorite city – a tough trifecta at the end of World War II. As such, it was a prime target for Allied destruction after their decisive victory. It’s recorded that Nuremberg was bombed so heavily that 90 percent of the city was destroyed within an hour. Walking through Altstadt today, that’s hard to imagine. The whole city is a living restoration project. 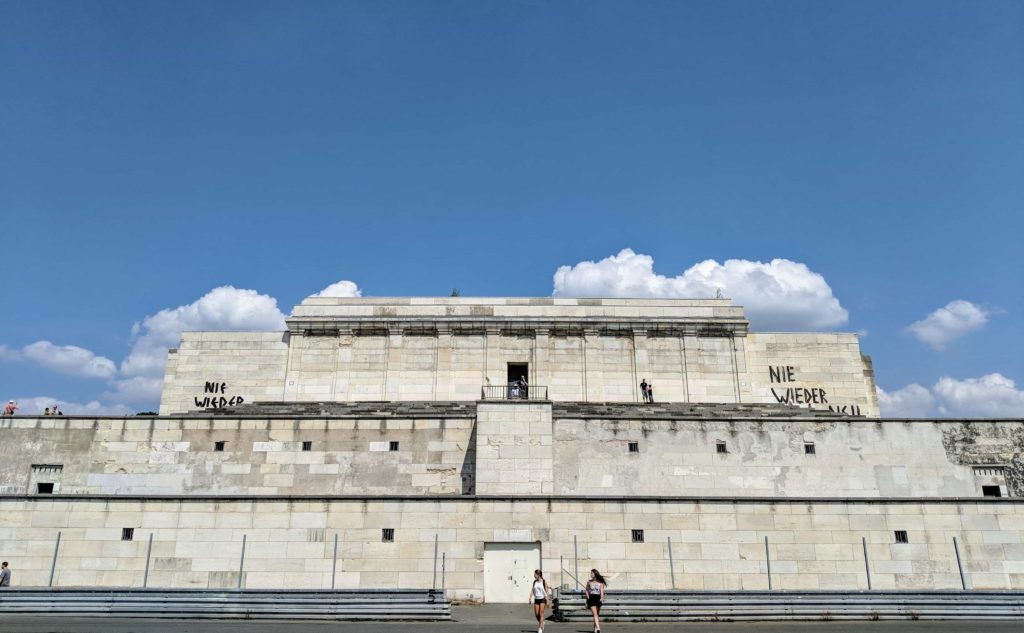 As beautiful as the old town is, there is no escaping the role that Nuremberg played in modern history. The city is home to the largest pieces of Nazi-era architecture still standing anywhere in the country. It was where Hitler and the Nazi party held rallies to whip thousands of party members and supporters into an absolute frenzy, and ultimately where some of them were tried for their crimes. It’s terrible, and important, to see.

It’s not often that you think of the influence that architecture and design can have on the public and its central role in propaganda. When you see Albert Speer’s (the infamous Nazi architect) imposing design of the Kongresshalle or the Zeppelinfeld stadium with its massive grandstand, you begin to understand the underlying strategy and message. The design evokes triumph. It’s both menacing and impressive.

It becomes easy to imagine what has been shown in newsreels from the 1930s: blood-red Nazi flags hanging from every wall, the fire lighting up the walls, the large Swastika that was affixed to the top of the Zeppelinfeld grandstand, Hitler delivering his speeches high above the masses. Terrible and fascinating. 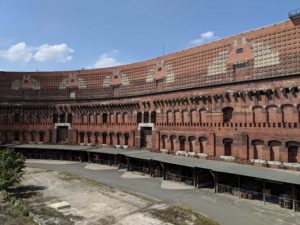 There is a Documentation Center on the rally grounds where you can learn more about the regime. It’s not the best museum on the Third Reich, but certainly helpful in understanding Nuremberg’s role and the actors involved. It’s also possible to take yourself on a walking tour through the former party grounds.

Nuremberg, like the rest of the country, has a truly dreadful burden of history to bear, but they do seem to bear it as truthfully as they can. I appreciate the city coming to terms with the past and leaving these pieces to educate, to remember, and ultimately, to prevent this from happening again. Most of the rally grounds have been repurposed into public parks, with placards indicating the history of each site. On a summer day with groups of people lounging in the sun, it’s hard to imagine the vitriol it once represented. For me, it seems that Nuremberg has transcended its tortured past, and has built something better.

There’s history in the food, the drinks, the architecture. It’s German, it’s Bavarian, and it’s uniquely Franconian. I found that there is much discover, and much to learn, in this hidden gem of a city.