Miami: sunny beaches, the SkyRise, and a melting pot of Latin Americans. The food scene is just as diverse as its people. We all know that seeking out authentic Cuban food is a must when visiting Miami, but what about all the other types of Latin American cuisine? How do they differ? What is considered Latino food? To answer these questions, I went on an investigative food tour of Miami to check out local restaurants and see what all the hype was about!

Read on to learn about Latino food culture, ingredients in Spanish, and the Latin influence in Miami culture!

Let’s break down the different Latino foods in Miami by country, specialty, and ingredients.  We’ll also clue you in to some can’t-miss Spanish food vocabulary and Hispanic food facts.

Cuban food is king in Miami, so naturally, my first stop was La Carreta (The Wagon) on Calle 8 in Miami’s own “Little Havana”. 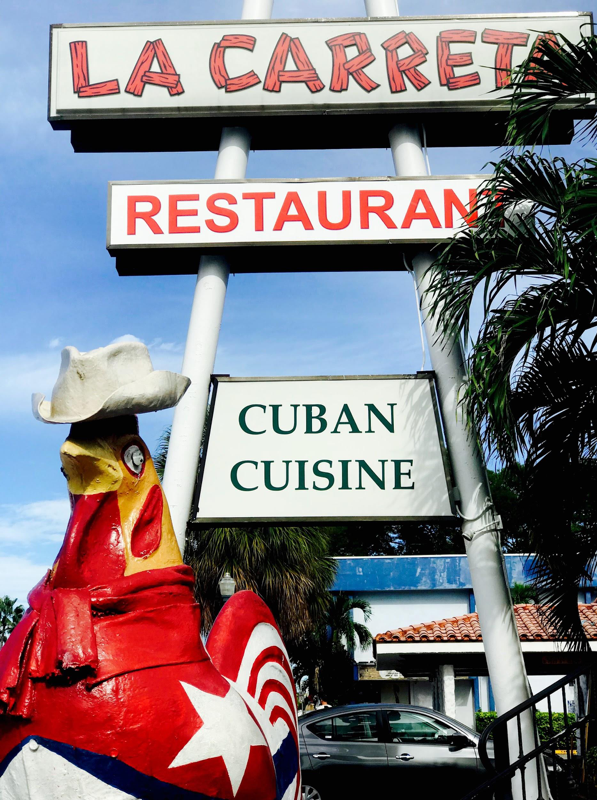 Before even heading inside to dine, you can stop at La Ventana (The Window) outside, where locals and tourists stop by for a cafecito (little coffee) and a pastelito (a little Cuban pastry) or a croqueta (croquette). 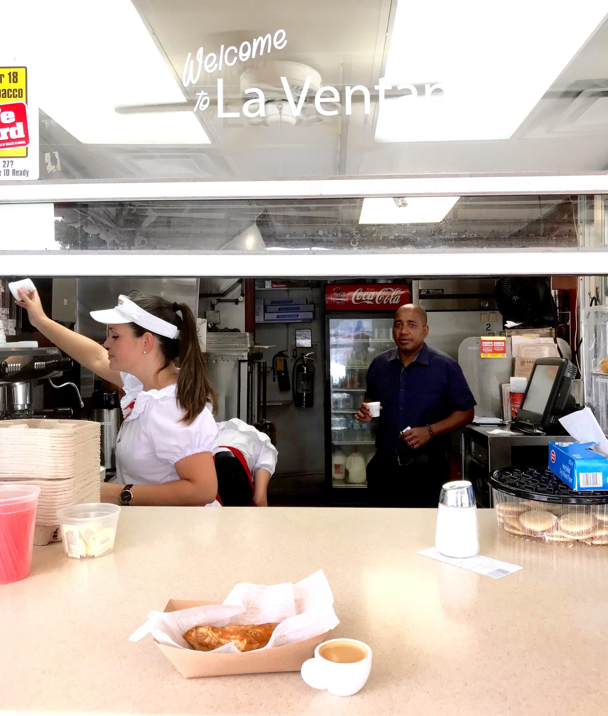 For those of you that have never had the mind-blowing pleasure of sipping on a Cuban coffee, it is akin to a high voltage electric shock to the senses of sugar and caffeine. Have one around 3:00 PM as the locals do for an afternoon pick-me-up. Take a bite of your pastelito (usually filled with guava and cheese) to top it off.

Inside La Carreta is where the magic happens. This is Cuban food at its finest.

On the right, we see a typical Cuban sandwich, which originated in cafes that catered to exiled Cuban workers in the Florida Keys and Ybor City.  A traditional Cuban sandwich has lechón asado, jamón (ham), Swiss cheese, pickles, and mustard. Finally, a juicy slice of lime to top everything off.

Next stop: El Palacio de Los Jugos (The Juice Palace), rumored to be rapper Pitbull’s hang-out spot at 2 AM. 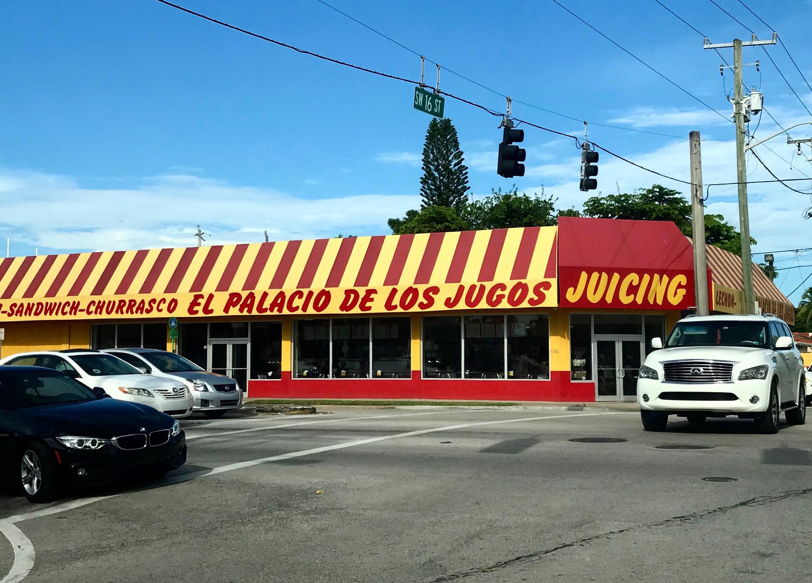 In addition to having every tropical fruit you can imagine (and even the ones you can’t), there is hot, ready-made Cuban food for pick up. I grabbed myself a jugo de guanábana (soursop fruit) from the Cuban lady at the register and proceeded to drool over the food behind the counter. 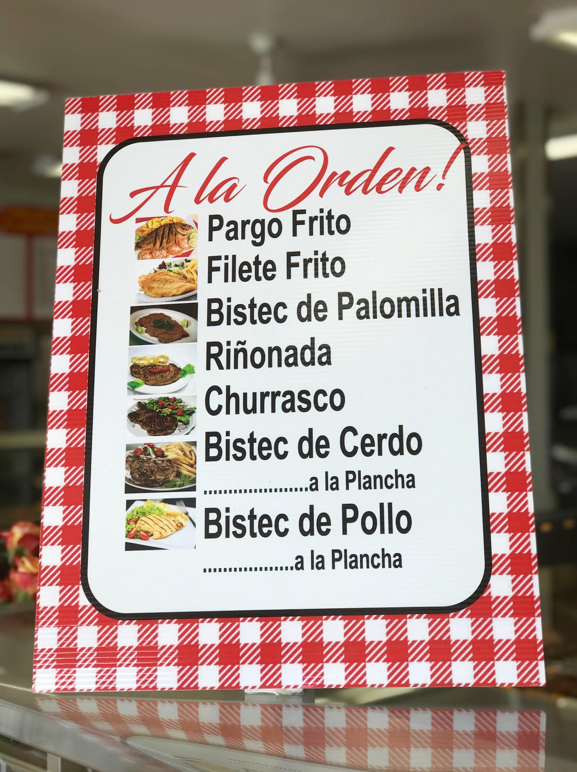 Colombians are known for their salsa, both on the dance floor AND in the kitchen!

Colombian food is similar to Cuban food in that it incorporates a lot of meat and plantains, but there is a higher value put on fried foods like empanadas and arepas. Black beans aren’t so common and are often replaced by lentils.

I went down to Patacón Pisa’o to see what the hype was about. Here, we see Colombian patacones, which are smashed green plantains (as opposed to the ripe plantains featured above) and deep fried in salt and slathered in hogao (tomato and onion sauce, from hogado meaning, drowned). Cubans also eat patacones under the alias tostones (Colombians claim that patacones are bigger). 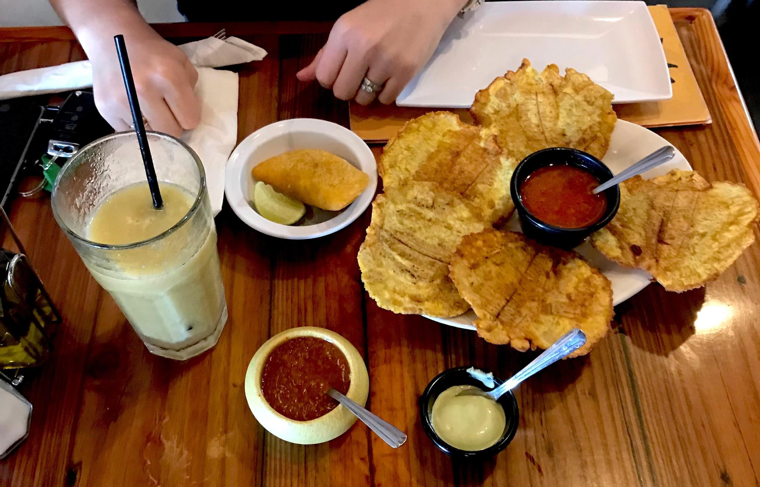 I also had a jugo de lulo (lulo juice – also known as “naranjilla”, similar in taste to gooseberry) and a Colombian empanada, deep-fried and stuffed with meat and potatoes, as opposed to the famous Argentinean empanadas which are oven-baked and filled with meat, olives, and egg.

Finally, a Bandeja Paisa, the national pride of Colombia. Bandeja Paisa translates to “Paisa Platter,” named for Paisa, a region in the Columbian Andes. This is a mouthful and will test your Spanish! Bandeja Paisa is complete with arepa, avocado, carne de res, maduros, chicharrón, arroz blanco and a fried egg to top it off.

Colombians are known internationally for their salsa music, but what foreigners don’t know is that their food is just as delicious, and served with spice, too! Top off any of these dishes with the famous Colombian salsa, ají, to eat like a true Colombian!

Planning a trip to Miami and looking to brush up on your español? See how our proven Pimsleur method can help you learn Spanish on-the-go!