Traveling solo? Or just have no company today? No problem! Eating alone in Japan is easy, especially in urban areas like Tokyo, Osaka, and Nagoya. In fact, you will see many locals dining solo. Although McDonald’s and Starbucks are everywhere in major cities and convenience stores in Japan are well-stocked, why not try some quick and casual Japanese food, aka B-kyuu gurume (B級グルメ) meaning “B-grade gourmet.” Here are some B-kyuu gurume you should try, especially when you are eating alone in Japan!

Tachigui Soba Ya (立ち食いそば屋) means “standing buckwheat noodle shop.” There are a couple of big chain restaurants of this style such as Fuji Soba (富士そば) and Yude Taro (ゆで太郎), and they are often found around train stations. They are very popular among local office workers.

One thing that you have to keep in mind is that these restaurants usually use a ticket ordering system. Tickets are called shokken (食券) and are often written only in Japanese. There will be plastic food displays outside, so remember the name of the dish you’d like or take a picture and find the right ticket at a shokken-ki (食券機) “food ticket machine.” 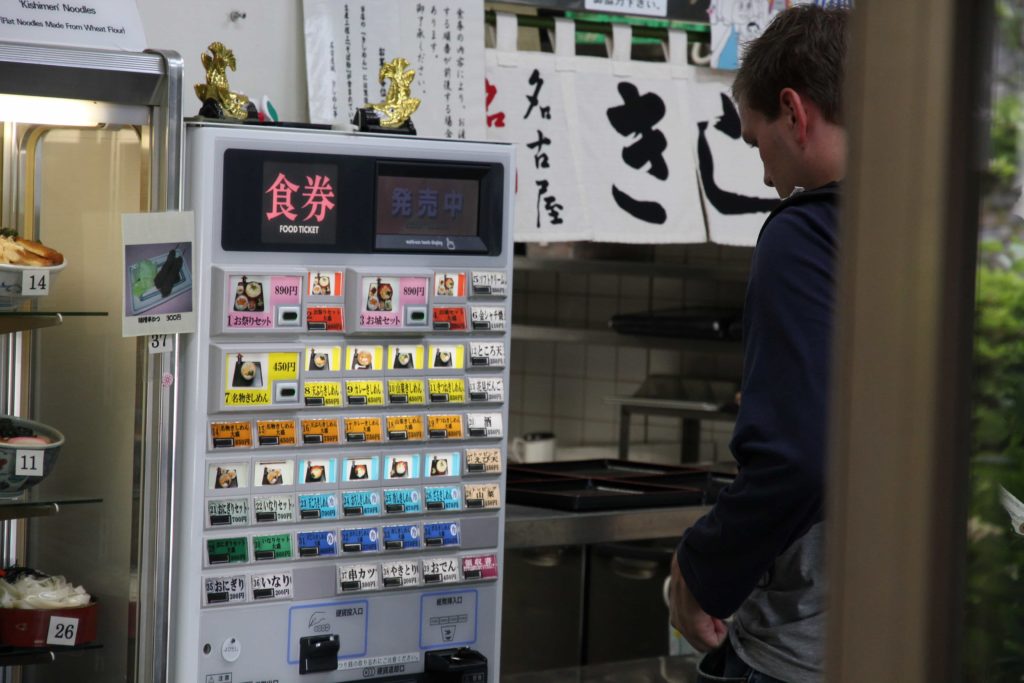 You may already know what kaiten-zushi (回転寿司) is. This is a type of sushi restaurant that has its dishes rotating on a conveyer belt.

The easiest way to eat at kaiten-zushi is to grab dishes that are going around.  But you can also try to order fresh sushi by saying “sumimasen, ～ kudasai!” (すみません、～ください), meaning “Excuse me, please give me ～!” to one of the chefs making sushi in the middle of the conveyer belt circle.

You will see many locals ordering like that because they want the freshest possible sushi. But you don’t have to worry about the quality of the rotating dishes. They are always replaced before they get stale.

Warning: I know it looks very entertaining, but don’t put anything on the conveyer belt!

Kissaten (喫茶店) means “coffee shop”, but not a Starbucks-style coffee shop. It is a sit-down high-end coffee shop where you can relax and spend some time.

This is a place not only for coffee but for light meals such as sandwiches, Japanese-style curries, or pasta dishes called Neapolitan (ナポリタン).

Neapolitan is a ketchup-based pan-fried pasta which was invented in Japan. It is usually cooked with sausage or bacon, green peppers, and mushrooms. There will be Tabasco and parmesan cheese on the side as well. It’s been loved for over 70 years in Japan.

Another unique dish at a kissaten is “morning set” (モーニングセット). It is a dish only served in the morning with coffee and usually includes bread, eggs and sometimes a small salad. Some kissatens offer a free morning set with a cup of coffee. If your hotel doesn’t include breakfast, this could be a great option.

It is good to know two more words when you go to a kissaten. The first one is “bulendo” (ブレンド). This means “blended coffee”. Each kissaten has its own bulendo, which could be considered an indicator of how good the kissaten is.

Second is the kanji for coffee, 珈琲, pronounced “koohee”. It’s good to remember this kanji because kissatens often don’t have any English signs outside and only have a sign with this kanji.

These aren’t hamburger shops. They serve quick tempura rice bowls called tendon (天丼)  or beef rice bowls called gyudon (牛丼). Such restaurants include chains such as Tenya (てんや)  and Yoshino-ya (吉野家). These places have fast-food-level quickness, but you can still order rice-based food and miso soup.

One phrase that you might hear from local customers at gyudon stores is tsuyudaku (つゆだく). This means “extra soup”. Some people like to soak their rice in the broth that the beef was cooked in.

If you are OK with eating raw eggs, I personally recommend gyudon with a  raw egg, which is namagtamago (生卵) in Japanese. It becomes an extra layer of sauce on top, which brings the gyudon bowl to the next level!

Ramen is already very famous worldwide, but it is considered an even more casual meal in Japan than in western countries. It is cheap and you will see many local ramen fans who come alone, sit at the counter, quickly eat and go.

A couple of common ramen-related words that are good to know are kaedama (替え玉), “another serving of noodle,” and han-rice (半ライス), “half size rice.”  These are options that local customers order when they want to eat a lot.

Finally, remember to say, “Gochiso-sama-deshita,” (ごちそうさまでした) meaning “Thank you for the meal,” to the restaurant staff after eating! This will make them instantly happy.

I hope this article helps you prepare for your next solo meal in Japan. Enjoy eating alone!

Headed to Japan? Take Pimsleur with you. Try the Full Pimsleur Japanese Premium Program for 7 days Free. 5 Levels and 150 Lessons for only $19.95/month thereafter.