By now you must have heard rumors of the spontaneous act of craziness, which Pimsleur has 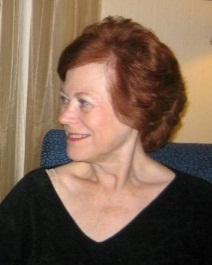 perpetrated on your behalf.  Having read of your appearance in Arkansas several months ago, and your frustration at the limitations of Pimsleur’s vocabulary in Japanese for certain situations — explaining to the cabbie that you are gay and have a niece and god son – our Editor-in-Chief, Beverly Heinle, had the idea that we should write and record an incremental Japanese lesson that would equip you to answer in kind the next time you were chatted up by a Japanese cabbie.

Attached is a kind of teaser with a photo from the recording session we had last week with your Japanese lesson, and the

script which I include as a further memento of your lesson – scripts are never supposed to leave the Concord office, so I’m likely to get heat for this.

On behalf of all of us at Pimsleur, we appreciate your support, albeit backhanded at times, and we hope you enjoy the recording.

The audio you sent is one of the funniest things I’ve ever heard-just perfectly ridiculous. And to

hear it in those voices, to see a picture of Ray Brown- it felt almost wrong to look upon his face. It’s the way I felt when I first saw my first NPR anchor. Wait, I thought, you’re human?

I hope you’re not put off by my story. I’ve used your Italian, your German, and your Japanese, all to great effect, and I recommend your program to everyone. 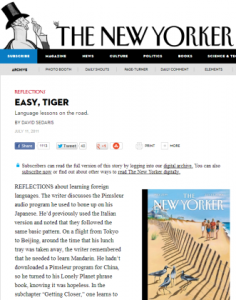 It was while working with the fact checkers on David’s article on language in The New Yorker, July 11, 2011, that we realized we’d found the perfect means to present our first ever Pimsleur special vocabulary lesson. They played middle man, and the email exchange above took place.

David Sedaris’ new book and audio book, Let’s Explore Diabetes with Owls, will be out April 23, 2013.   They contain the article that ran in The New Yorker.  The audio book also contains an excerpt from the Pimsleur bonus Japanese lesson where you can hear the nuances in pronunciation, and where you too will laugh till it hurts.

Click for the Pimsleur track on the Sedaris audio book, Let’s Explore Diabetes With Owls.