The signs are everywhere: to know and to have tried Pimsleur, is to love Pimsleur.
This passion people had for Pimsleur was immediately apparent to me as a new employee.  Several friends who congratulated me on taking the job had personal Pimsleur success stories to tell and, the Pimsleur reviews I read on Amazon and Audible.com were raves, and of a very personal– “these courses changed our lives,”–nature.  And everyone who worked on Pimsleur treated it as far more than just a self-help commodity. 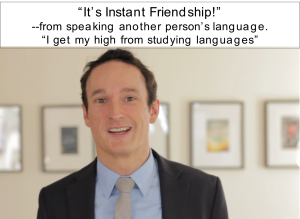 Two weeks into the job I was the happy recipient of an offer from a philanthropist in Lexington, MA – the next town over from our offices in Concord—who knew Pimsleur and was passionate about language learning and what it could do for World Peace (a longer story).  He made an offer to donate $500,000 if Pimsleur would develop a course program in Pashto and give it away free to the troops in Afghanistan. That offer has blossomed with into over 23,000 courses in units of both Afghan languages, Pashto and Dari, made available at no charge to the troops, working with the USO as our partner. That’s some 350,000 hours of instruction. 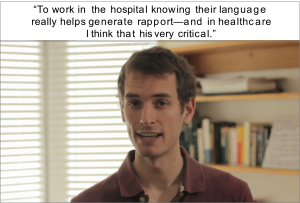 In 2012 we installed a mechanism where our users could post Pimsleur reviews directly to www.pimsleur.com and some 1,655 have done so, providing great feedback and great reviews and testimonials on the site. To bring this passion for Pimsleur to life we asked some of those who had written Pimsleur reviews and testimonials to let us film them for a short video. They were even more enthusiastic in person when describing their experiences with Pimsleur and their quest to learn new languages and speak with people in their native tongues. 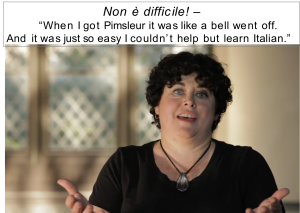 Many of them reinforced the notion that if you follow the course as outlined by Pimsleur, that learning a new language is far easier than we are lead to believe — or far easier than the way it was when trying to learn conjugations in taught in most high schools in the US. Several users mentioned the a-ha moment when a bell goes off, or when you begin to think there’s some “special sauce” being dished out, that makes you realize there’s more to Pimsleur than meets the eye. (It’s in the ear.)

I’ll admit to unbridled glee on seeing a 15-year-old high-school kid smile as he spoke about “secretly studying” Pimsleur’s French Course on software, and finding afterward that he had not just caught up with his peers, but exceeded them in his knowledge of French. 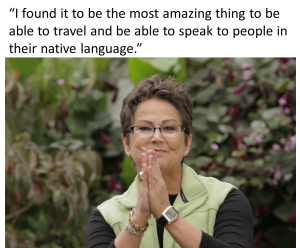 However the most universal desire when you read through all of our Pimsleur reviews, or listen to the participants in the video is the most basic human desire to be able to converse with people, particularly people in a foreign land, in their own language and to be understood.

The Nelson Mandela quote about language always seems the most apt: