What is the Poisson D’Avril Tradition?

The most benign version of a Poisson d’Avril gag (on April Fool’s Day) nowadays involves tagging one’s friends and mates with the image of a fish taped to their back, without them noticing — the aim being for the fish to stick as long as possible without the persons noticing that something is fishy around them.

The tradition of a day for pranks and pranksters on or about April 1, has existed as far back as Chaucer’s Canterbury Tales: See “The Vain Cock” where Chanticleer is tricked by a fox. (Wikipedia).

Is there something fishy about learning a new language?

What helps make learning a foreign language possible at first is the cognates, the words or phrases that are similar to or the same as words in English. According to Paul Pimsleur, while French was never actually joined with English, historical cross-pollination means that American newcomers to French can guess the meaning of 30% or more of a random list of words.  (Paul Pimsleur, How to Learn a Foreign Language, 2013, p. 11) 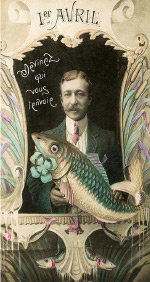 What is fishy, however, is when the language you are learning seems arbitrary, when the cognates don’t quite match. An early memory of one such fishy linguistic misnomer is poisson rouge, the French term for a goldfish, which is literally a “red fish.”  It drove me nuts.  (I’ll admit that most real goldfish you see in their bowls are more red than anything else, and that gold, as used in English, is the term that is actually furthest from an accurate description of the patina of these denizens of the domestic depths.)

However, the big fishy surprise was yet to come:  these self-same inhabitants of cloudy octagonal bowls all across the US, were, for one day in April, the center of the comedy stage in France and Italy, the wet and cold rulers of a world turned on its fins.

It turns out that the holiday known as April Fool’s Day on our side of the Atlantic is known as Poisson d’Avril when celebrated by the French and Pesche d’Aprile when celebrated in Italy. (Judging from the absence of great vintage post cards on-line, the Italians may have come to this more recently than the French.)