Ever wondered how Christmas in Brazil is celebrated? How about what they eat at Christmas, or what Christmas music sounds like in Brazil? We’ve got you covered this holiday season! From our Brazilian Christmas feast breakdown to our investigation on Brazilian Santa Claus, we’ll walk you through holiday traditions and music from our Brazilian family to yours.

Let’s take a look at what Brazilians eat at the Ceia de Natal (Christmas Eve dinner.) 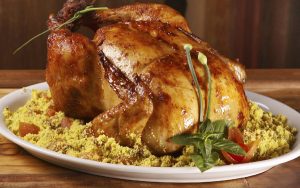 Chester is a Brazilian superstar. Though it sounds like a cartoon character, it’s actually a breed of chicken featuring an especially large chest (hence the name), and bred to be low in fat and high in protein. In other words, it’s pure Christmas goodness that’ll feed the whole family.

Don’t believe me? Here is a running Christmas joke about Brazilians going overboard with raisins – even in the cat’s food.

Pernil, a slow-roasted pork leg or shoulder, is found on Brazilian Christmas tables everywhere. Some families incorporate a tropical feel, with pineapple and limes. 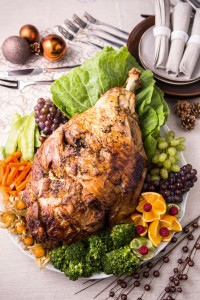 Pavê, the Brazilian version of an Italian tiramisu, is a delicious treat specially adorned around Christmas time. 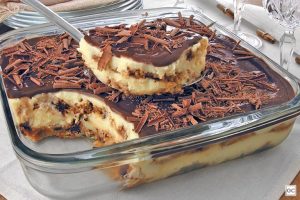 This sobremesa (dessert) is famous for being the butt of the nation-wide dad joke: “É pavê ou pacomê?” It’s a real groaner in Portuguese. This play on words works because pavê sounds a lot like pra ver (for looking), and pacomê sounds a lot like “pra comer“ (for eating).  “É pra ver ou pra comer?”  (Is it for looking or for eating?)  This dad joke is so famous around Christmas time that Brazilians have even coined a term tio do pavê (the pavê uncle) to mean “cheesy uncle.”

Even Buzzfeed recognizes the tio do pavê **50 horrible jokes that will awaken your inner cheesy uncle. 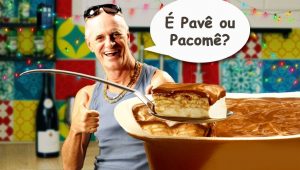 Practice Your Portuguese Listening Skills With More Iconic Dad Jokes During the Holidays in Brazil.

Brazilians don’t have much of a tradition of Christmas music like Americans, with hundreds of classic Christmas tunes. Here are three of the most famous songs, notice that two of them are just translations of the American Jingle Bells and the Austrian Silent Night.

(Ring the Little Bell) is a translation of Jingle Bells that children love to sing at Christmas time.

Because of the sheer amount of Hollywood movies circulating in Brazil, children can’t ignore the American version of Santa Claus that is marketed worldwide.

Today, in shopping malls throughout Brazil children do line up to take a picture with chubby men clad in red occupying golden thrones and making dreams come true. But that wasn’t always the case….

In the past, Santa was never a big part of Christmas in Brazil, and if he made an appearance at all, it was in the homes of wealthier families. Many Brazilians will tell you that “Brazilians are too poor for Santa,” accompanied by a self-deprecating laugh.

Most families practice some form of Secret Santa, in which everyone is given one person for whom to buy a gift.

Presents are usually opened at midnight on Christmas Eve (a Véspera de Natal), and it’s a family affair.  Since everyone knows who provided their gifts, it leaves little room for mysteries.

What do you have in common with Brazilians this Christmas?

This is a general overview of what Christmas is like in typical Brazilian households. Did you spot any similarities in how you celebrate Christmas? Let us know in the comments section below!

If you are interested in Brazilian culture, learning the language will take you a long way toward understanding the amazing Brazilian people. See how we can help you learn Brazilian Portuguese at Pimsleur today.

Or give the Christmas gift of language learning to yourself this holiday season!

Use code Blog for up to 15% OFF Storewide.