Blog Home / Travel / An Emergency Abroad – Who Do You Call?

Are You Prepared For An Emergency Abroad?

Imagine this: you are the foreign au pair taking care of twin three-year-olds while their parents are away for the weekend. When you wake up in the morning, you find only one of them asleep in bed. There’s no reason to panic yet, at least that’s what you tell yourself, but your mind starts racing.

You take a lap around the apartment and call out his name. You check the parents’ bedroom, the living room, the kitchen. He’s not there. You are now mildly panicked. You leave the apartment and hastily scale the stairs to the front lobby. Nothing. You remember the one time he walked all the way down to the garage by himself, so you check there, too. You are screaming his name. He is nowhere to be found. You run back up the stairs and into the apartment. The other child is awake and asking where her brother is. You call your mother and, at this rate, you are on the verge of a mental breakdown.

How Do You Call 911 in Another Country?

You’ve just lost a child. You might need to call.

While you consider the microscopic details of the horrifying conversation you’ll have when the parents return from their weekend getaway, you catch a glimpse of two little feet poking out from beneath the living room window curtains. You walk over very slowly and then all at once. Forcefully, you pull the curtain aside, and sitting there smiling broadly is the three-year-old child you thought you had lost.

You get off the phone with your mother. You don’t call the police. The child is laughing, and you say, “That was scary, will you answer when I call you next time?” You’re pretty certain he doesn’t get it. The sun is starting to warm the house, and you think it would be a good idea to get some fresh air. It’s a cool spring day, so you wrap the children in light fleece jackets and help them with their shoes. You put your hand over your chest and feel the rhythm of your heartbeat slowly return to normal.

You grab the overflowing kitchen trash before heading out the front door so you can throw it in the dumpster outside. You’re only on the second floor of the apartment complex, but the kids love to take the elevator, so you squeeze into the age-old, rickety European lift. It hardly fits all of you.

You press the button that will take you to the lobby. The kids start jumping in the ramshackle lift and when you say “Please stop!” they do, and so does the lift. It takes you a few seconds to realize the elevator has stopped between two floors. You press the lobby floor button once more but to no avail. There’s no movement. You wait five minutes and press the red Alarm button, which is more like a car honk than a reliable call for help. Holed up with two children and a fruit-fly infested trash bag, you are totally stuck. Glad your cell phone is in your pocket, you dial 112; this time, you need to call. 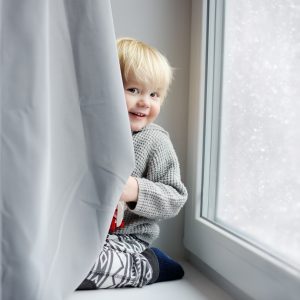 This Hypothetical Story? It Actually Happened.

I was stuck in a small European lift with the twins I take care of for over an hour and a half on a cold winter’s day this past February. I called the police and they showed up right away, but it was the elevator mechanics we were waiting for. It was a Sunday holiday, so it took longer than usual. The kids were fine—Chlöe fell asleep in my lap and Löic sang “Twinkle, Twinkle Little Star” and “Ring Around the Rosie” over and over. I was the one who could hardly keep it together.

By the time the mechanics arrived, Löic had tired of singing and Chlöe had woken up. Löic looked up at me and said, “I don’t want to be in here anymore.” We felt a sudden and very brief drop as the mechanics manually pulled the elevator up to the second floor. My heart dropped into the pit of my stomach. We slowly inched our way to the second floor. When there was enough space to finally wiggle through, I picked Löic and Chlöe up and handed them through the open space into an officer’s hands. I lifted myself up and crawled through, too. We made it!

After all that, Löic and Chlöe still wanted to go outside. I took a deep, long breath.

As a foreigner traveling in a new country, it’s important to be prepared for an emergency in that specific region. The most useful things to have are the knowledge of local emergency numbers and a mobile phone to make the calls with. Many countries even allow emergency calls to be made without a SIM card and dialing an emergency number from most mobile phones do not require the keypad to be unlocked.

Below are a few things to keep in mind when calling an emergency services number both at home and abroad. Most importantly, keep as calm as possible and listen closely to the dispatcher’s questions.

Do Not Hang Up – Even if You Called By Mistake

If you, or your child, dial an emergency number by mistake do not hang up. Dispatchers will not know whether an emergency exists or not, and will likely send responders to your location.  Explain the situation to the dispatcher and understand that in many locations police are still required to respond in person to verify that all is well.

If you call an emergency number from a landline, your address will appear on the dispatcher’s screen. It’s the procedure, though, to double check this information by asking you to verify your location.

If you are calling from a cell phone, your exact location will most likely not be available to the emergency operator so having an accurate address is critically important.

Always know the name of the country and city that you are in and take note of landmarks and street names. If you’re in, say, Japan or China and you haven’t mastered the alphabet yet, make sure you also have a photo or note in your phone with the address you’re staying at.

If you have cell service, you can determine your current location in several ways:

How to Find Your Current Location On Google Maps

Open the Google maps app and press the black compass circle in the lower right-hand corner. Your current location is displayed as a blue dot. Selecting the blue dot will also allow you to share this location via text or email.

How to Find Your Current Location On Apple iOS

In the Messages app, open a new message and type “I’m at ”. Make sure to include a space after “at”.

Select it to send your location to either yourself or in some instances you may be able to text it to the emergency line.

What If You Don’t Speak the Local Language

In most EU countries, the dispatch operator will speak both the local language and English. In many other countries, your call can be directed to a tourist emergency line or the dispatcher can engage a translator or translation service.

When traveling abroad, you can make it as easy as possible for emergency professionals to help you by learning how to say the name of your country and your native tongue in the local language.

Mobile apps (like LanguageLine and Telelanguage) which connect you to live translators can also be useful. These services typically cost around $4/minute.

SOS Calls on Your Cell Phone

Emergency calls on your cell are free and available to you even if your mobile phone is outside of your service area, locked or out of credit.

If your phone is on the GSM network (the cellular standard for 80% of the world – with the exception of the US and Russia) dialing 112 will automatically redirect you to the local emergency dispatch. This feature works around the world.

If your phone uses a SIM card then it is on the GSM network. In the US, ATT&T and T-Mobile are the two major GSM carriers.

Emergency SOS and Emergency Contacts on an iPhone

For older versions of the iPhone, rapidly press the side button 5 times to make the Emergency SOS slider appear.

Then, for every model, drag the slider to the right to place your call.

When you place an Emergency SOS call on an iPhone, any emergency contacts that you’ve set-up will automatically be notified.

To set your Emergency contacts in the Health app:

Select “Edit”, scroll down to the Emergency Contacts section, and then select “add emergency contact”.

The ability to send a text message to reach emergency services from your cell is now possible in some locations. It’s far from universally available, though, even in the US. For the foreseeable future, be prepared to make a voice call, and do not assume that a text sent to an emergency number has reached a dispatcher.

Texting to emergency services technology is available throughout the UK where it’s known as EmergencySMS. Before you can use it, however, you must pre-register your cell phone number. This can only be done while inside the UK. To register, send the SMS text message, “REGISTER“, to 112 and then respond “YES” to the reply.

And if, in the off chance you find yourself stuck in an elevator between floors somewhere, here is a list of local emergency numbers that could come in handy:

Emergency Numbers Around the World

Traveling abroad? Pimsleur has got you covered!