Miami, Florida– Art deco, roller blades, and one of the biggest Latino areas in the U.S. The food scene 100% reflects their diversity and passion, all of which you order in Spanish.

In Miami Food Tour – Part One, we discovered Cuban and Colombian food staples, learned some vocabulary, and absorbed some Latino culture.  But what about the other types of Latino food in Miami? How do they differ? What is considered Latin food?

To answer these questions, let’s do some investigative journalism in Miami where we interview local restaurants and try staple foods!

Read on to learn about Latino food culture, ingredients in Spanish and the most popular Hispanic food in Miami!

In this section, we will break down the different Latino foods in Miami by country, specialty, and ingredients, along with some can’t-miss Spanish food vocabulary and Hispanic food facts.

The Staples of Peruvian Food:

Peruvian food is one of the most highly acclaimed cuisines of Latin America, up there with Mexican cuisine. The diet is influenced by Andean and Amazonian agriculture, stock full of starchy vegetables and grains, which is extremely wholesome. In fact, indigenous dwellers of these regions have the lowest recorded heart disease in the world.

In Miami, there are large Peruvian communities and Peruvian food is growing in popularity. 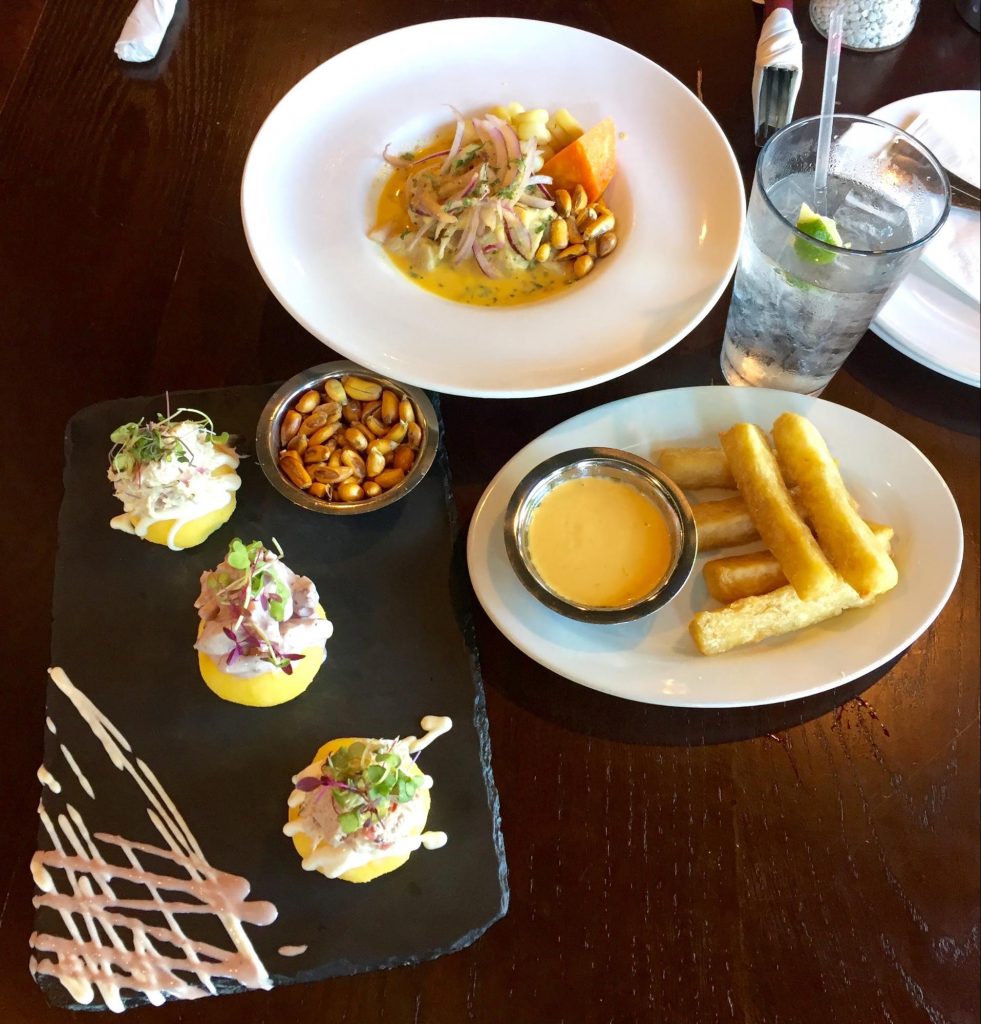 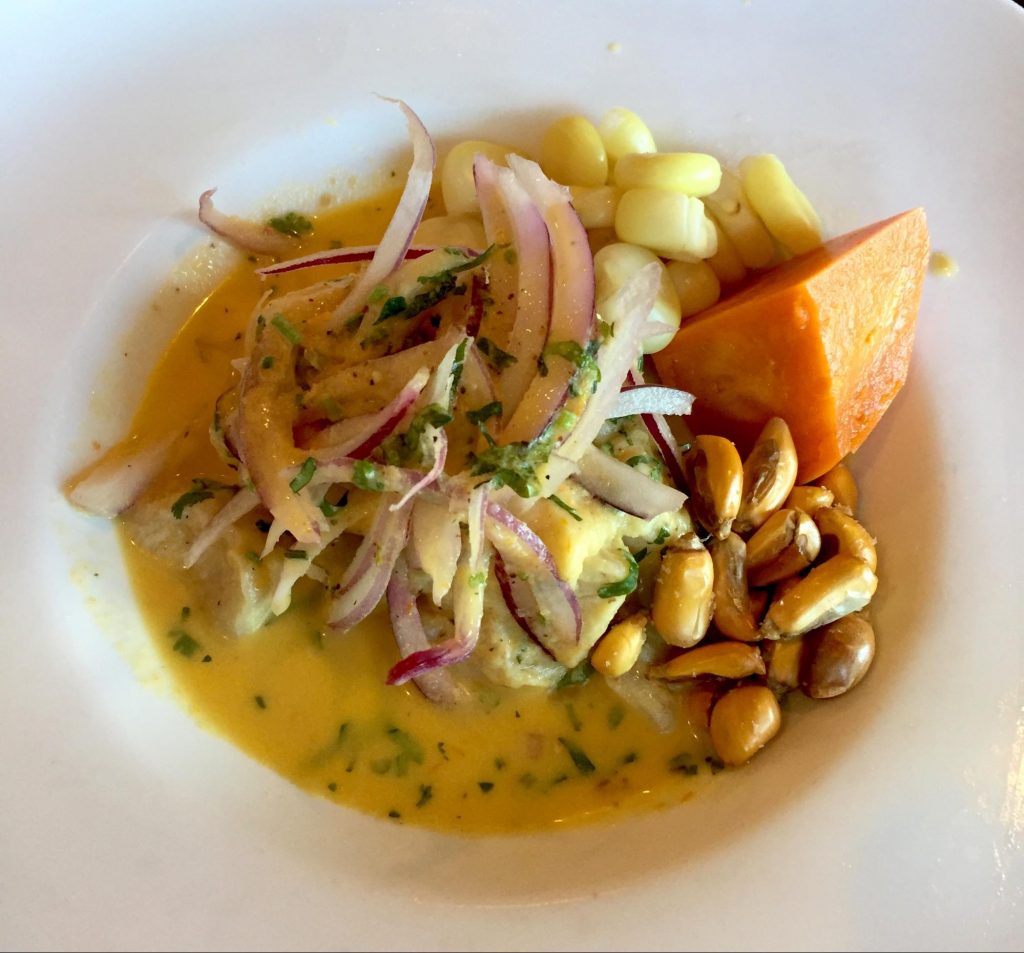 Causas (causes), named after the “cause” for independence. When José de San Martín, a libertador of Peru, attempted to raise funds for Peru’s independence, he encouraged people to sell foods prepared with whatever they could collect. Because most Peruvians had access to potatoes, vegetables, salt, pepper and lemons, the common dish became known as la causa a la limeña, later shortened to la causa (the cause). Til this day, they are served cold but are now topped with aguacate (avocado), pescado (seafood) or pollo (chicken), sometimes even pulpo (octopus). 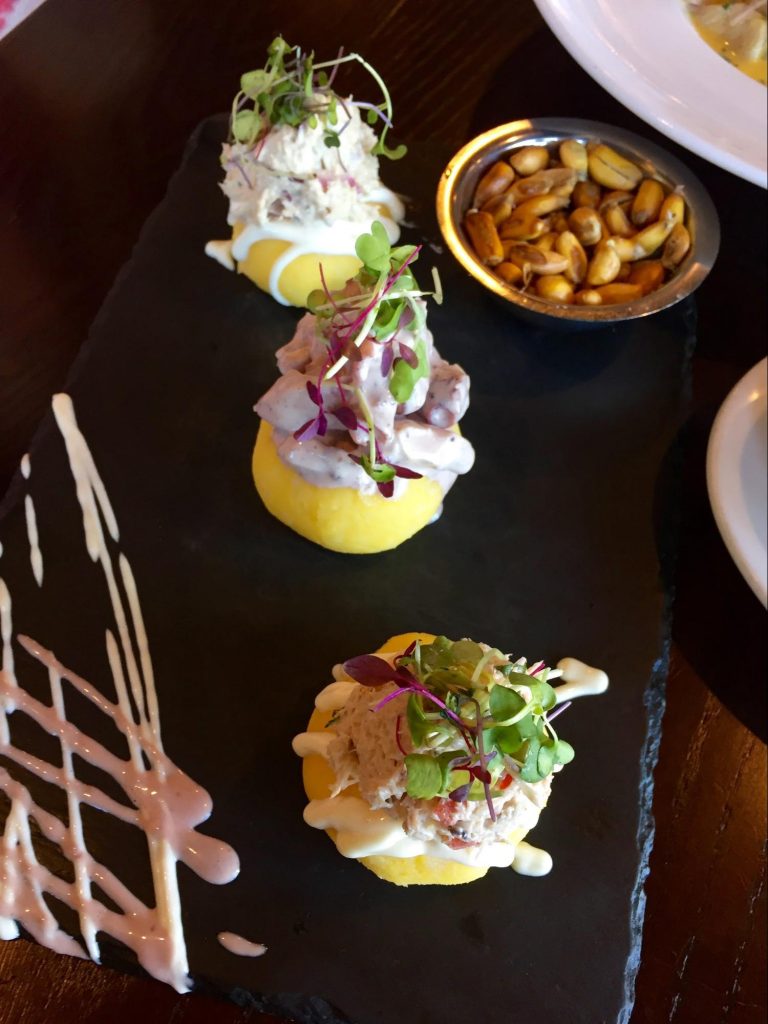 Swish it all down with some chicha morada (purple corn drink), an Andean beverage made with indigenous purple corn, pineapple peel, lime, cinnamon, and sugar. Oddly sweet and refreshing! 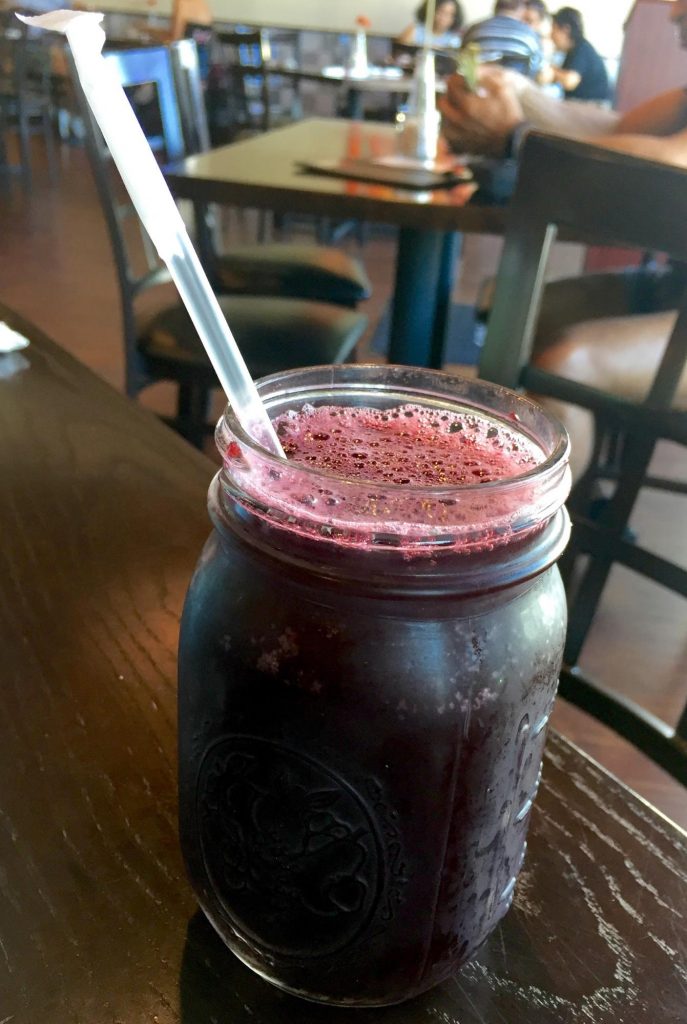 You know you are at a Peruvian joint in Miami when they are serving Inca Kola (a Peruvian lemon verbena soft drink that tastes like bubble gum) and starters consist of roasted corn nuts and fried sweet potato. 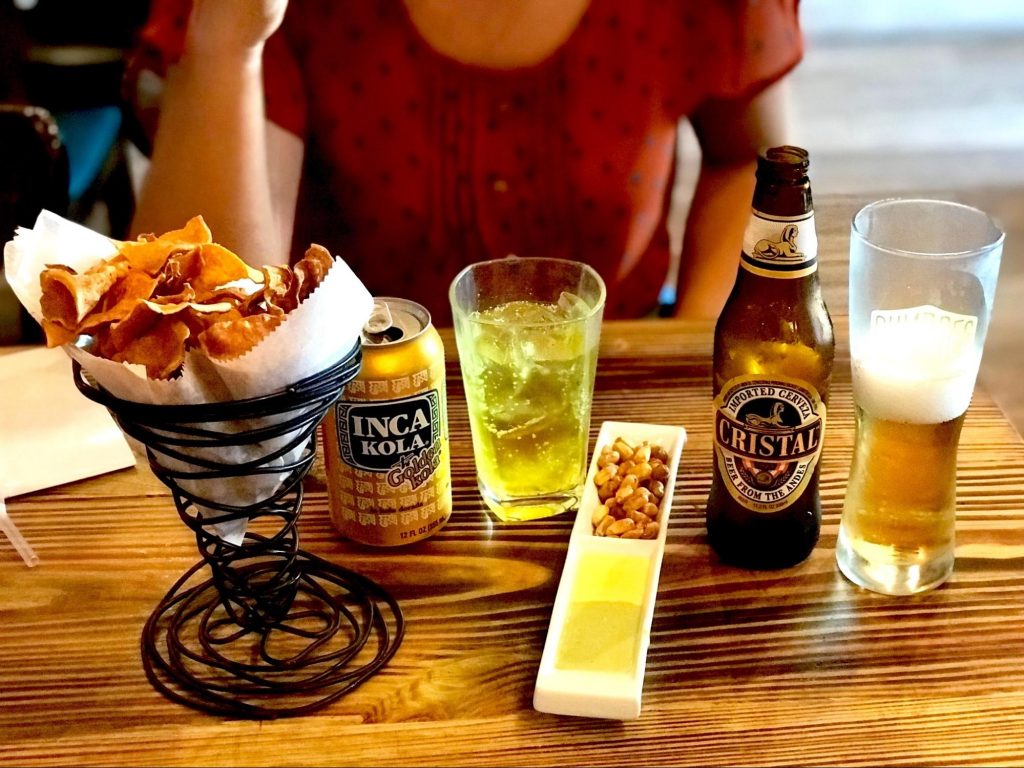 When you get tired of chowing down greasy fried food in Miami, opt for Peruvian. Not only are the indigenous grains and vegetables of their beloved tierra super-rich in fiber, but their significant Asian influence led to the development of lighter dishes, leaving out fatty cheeses and fried foods and incorporating more raw fish and citrus. For this reason, there are even several restaurants in Miami that combine Japanese + Peruvian food, like SuViche and Cevishiro!

The Staples of Venezuelan Food:

Because of Venezuela’s proximity to Colombia, much of the food is similar: meaty, juicy, doughy, and fried (and containing tons of cheese)! 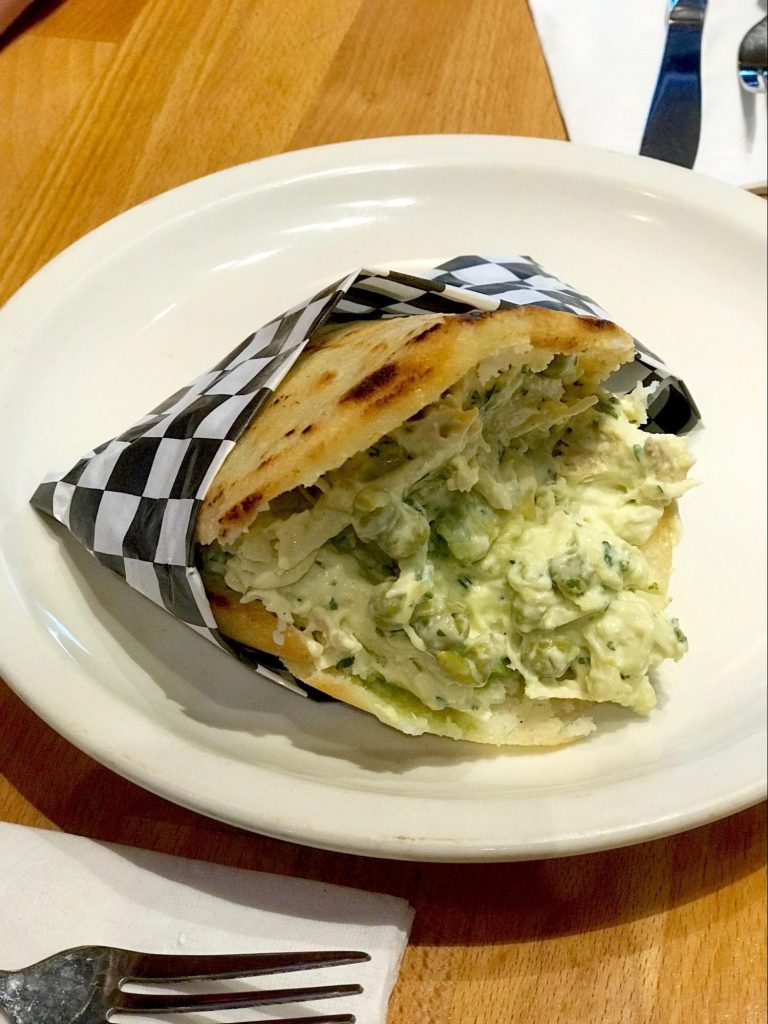 At Doggi’s Arepa Bar, Venezuelan waitresses will be happy to greet you and explain the difference between Colombian and Venezuelan arepas. The fried ground maize stays the same, but instead of mixing cheese in the masa (dough), they stuff them with just about anything you can think of, including classically shredded chicken and avocados.

We see this theme also play out with Venezuelan patacones. 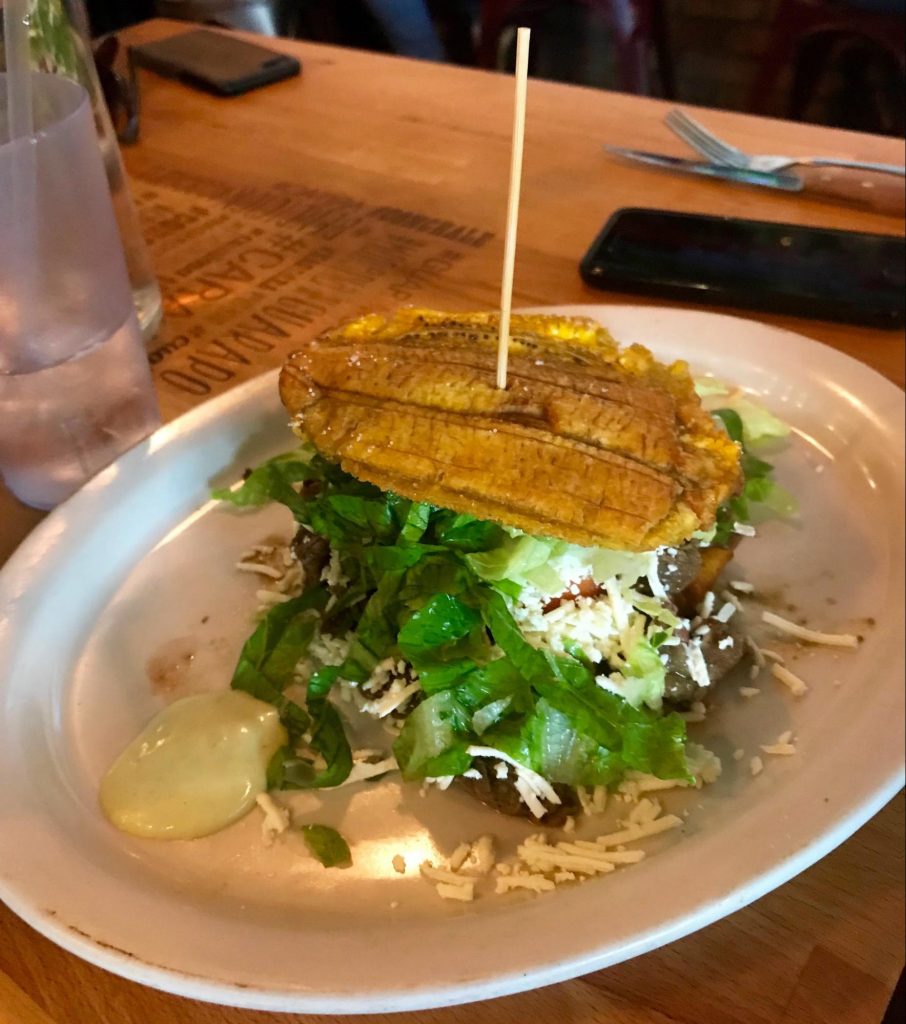 Last time, we saw that Colombian patacones were made with crushed green plantains, fried, and finally salted. They are usually eaten by themselves, just like Colombian arepas. Venezuelans, on the other hand, take the patacon to the next level, building on layers of cheese, fresh veggies, chicken, meat, and more cheese! Always accompanied by the classic guasacaca (creamy avocado sauce). 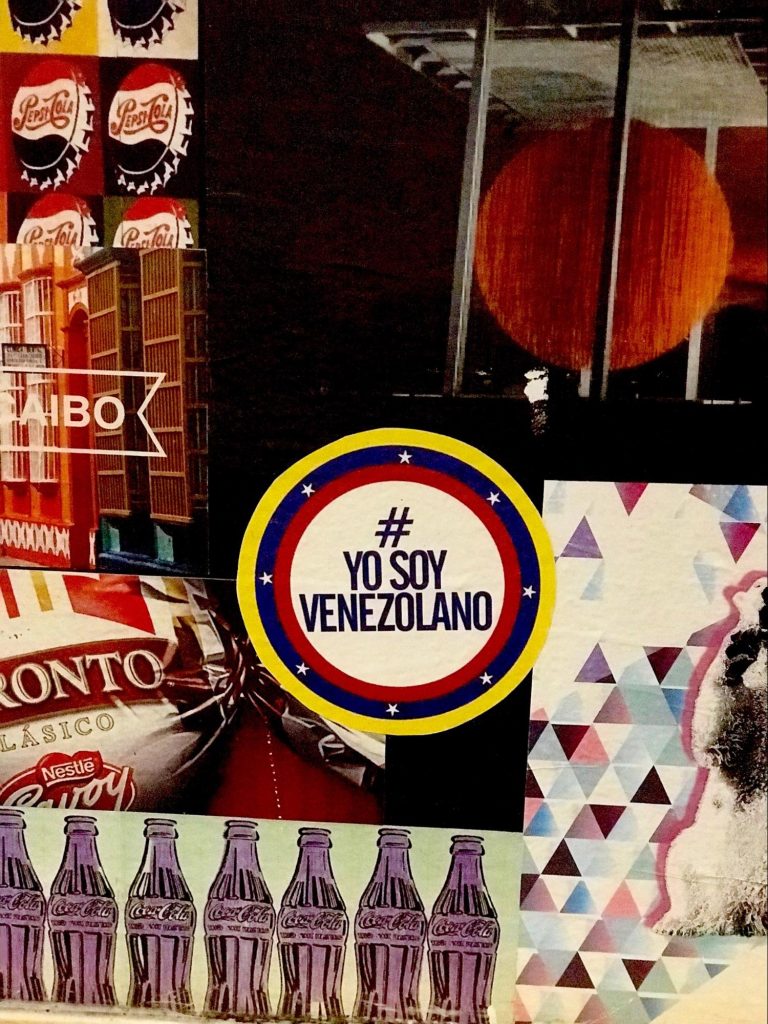 Can’t forget tequeños. Out of respect, I won’t call them Venezuelan mozzarella sticks, but they are fried breaded cheese sticks, usually with queso blanco (white cheese), a soft, mild cheese.

Wherever there are Venezuelans, there’s a party… and cheese!

When you think Venezuelan food in Miami, it’s always arepas and tequeños (even though there are plenty of other fabulous dishes and desserts). The best part about Venezuelan food is interacting with the lively locals, hearing their stories and participating in their passionate culture. There is never a dull moment, and you’ll never go hungry!

Check out a twist on Miami’s classic Cuban cuisine and discover some Colombian dishes!

Planning a trip to Miami and looking to brush up on your español? Check out our article on Miami Slang here, and see how our Proven Pimsleur method can help you learn Latin American Spanish on-the-go here!