Absinthe – The Green Fairy, Devil in the Green Bottle

Absinthe has a storied past. It carries an air of mystery and a sense of lawlessness, the mere mention conjuring up scenes of dim-lit Parisian cafes and patrons with small glasses of a glowing green elixir. It represents both creativity and artistry, and distorted perceptions and madness. Depending on who you asked in the early 20th century, it could be called la fée verte (the green fairy), or the Devil in the Green Bottle. And this means that above everything else, absinthe is sorely misunderstood.

I have always romanticized absinthe. But besides having a few flaming shots one wild night in Prague during my study abroad days, I had never actually tried to drink it properly. It instead remained in my mind’s eye, a fixture of La Belle Époque in 1920s Paris. The green fairy was inextricably linked to the can-can at the Moulin Rouge, or to the bohemian artists and writers of the golden age – James Joyce, Van Gogh, Hemingway, Picasso, Oscar Wilde, all noted consumers of la fée verte.  And because of these associations, I had always assumed that the spirit originated in France.

Not so, it turns out! In fact, absinthe comes from the French region of Switzerland, in an area called Val-de-Travers, in the Swiss canton of Neuchâtel. It was produced here from the 18th century until 1910 when it was vilified, banned and bootlegged for nearly a century. Absinthe was re-legalized in Switzerland in 2005 and has slowly been making its revival. Today, around twenty microdistilleries produce absinthe throughout Val-de-Travers, and export many different types of the spirit all over Europe. 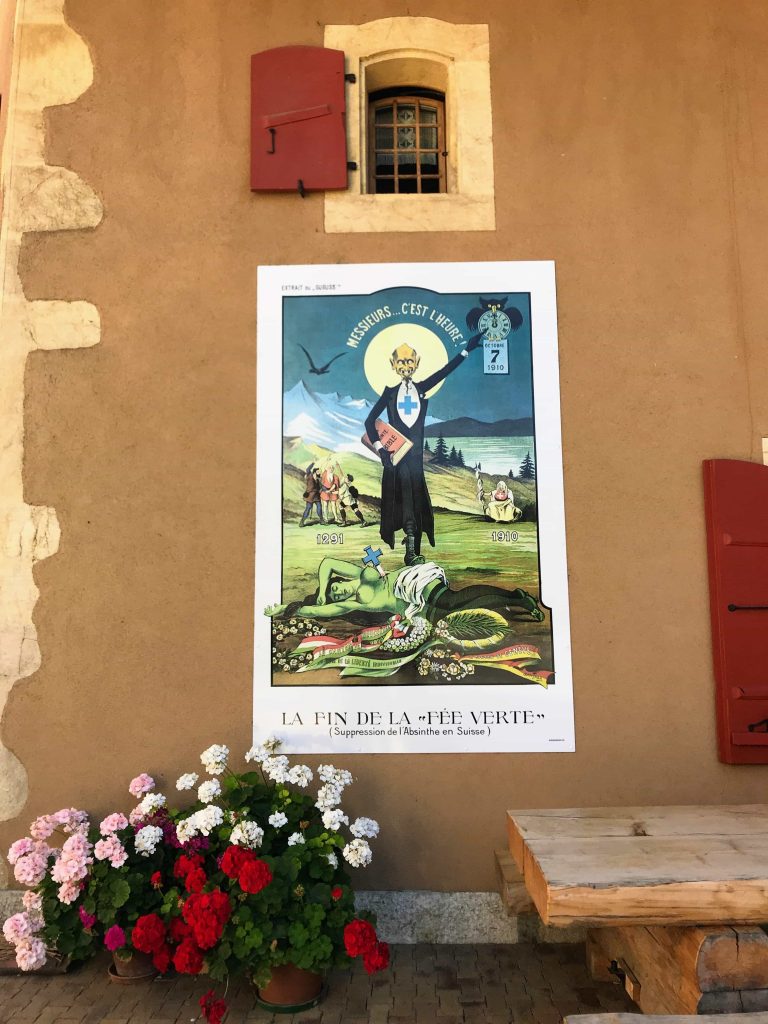 “Let me be mad, then, by all means! Mad with the madness of Absinthe, the wildest, most luxurious madness in the world!“

I didn’t go looking for absinthe in Switzerland. Instead, I quite literally stumbled across it. During a hike in Val-de-Travers, my husband and I realized that we were smack in the middle of the “Route de l’Absinthe,” the Absinthe Trail. Absinthe in … Switzerland? This beautiful but buttoned-up country of rules and regulations is the home of the world’s most infamous liquor? We were instantly surprised – and intrigued. So, instead of ending the day with beers (our usual post-hike treat) in Noiraigue, we decided to hop on a local train to the city of Môtiers for absinthe instead. What better way to understand a spirit than to visit its birthplace? 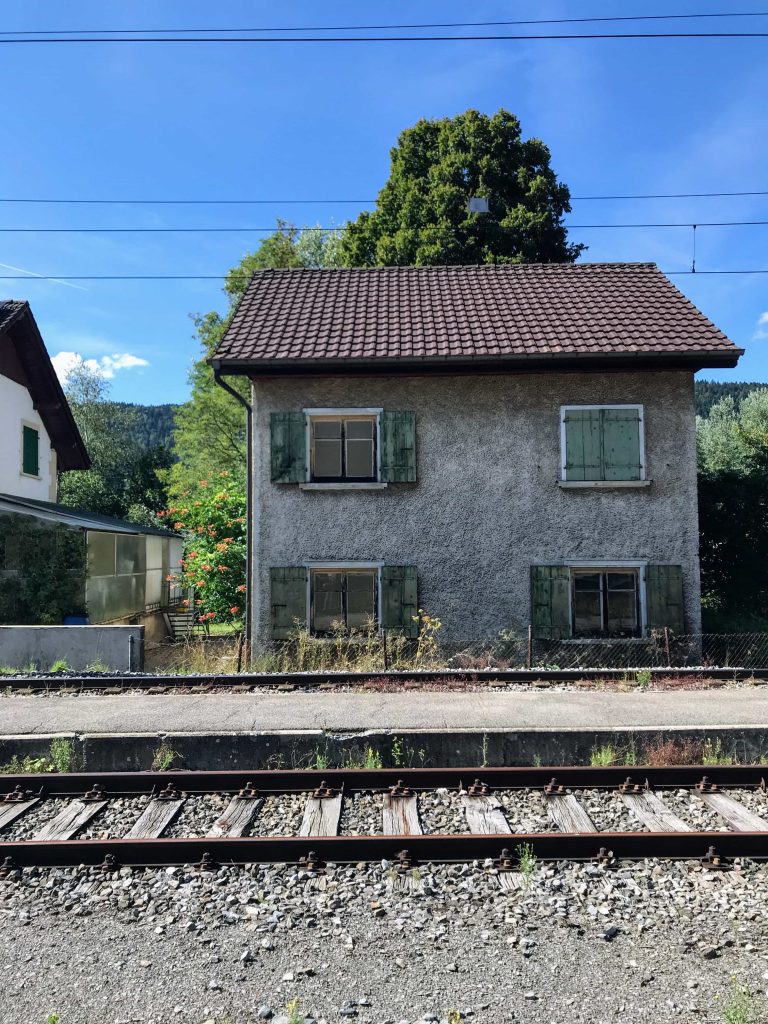 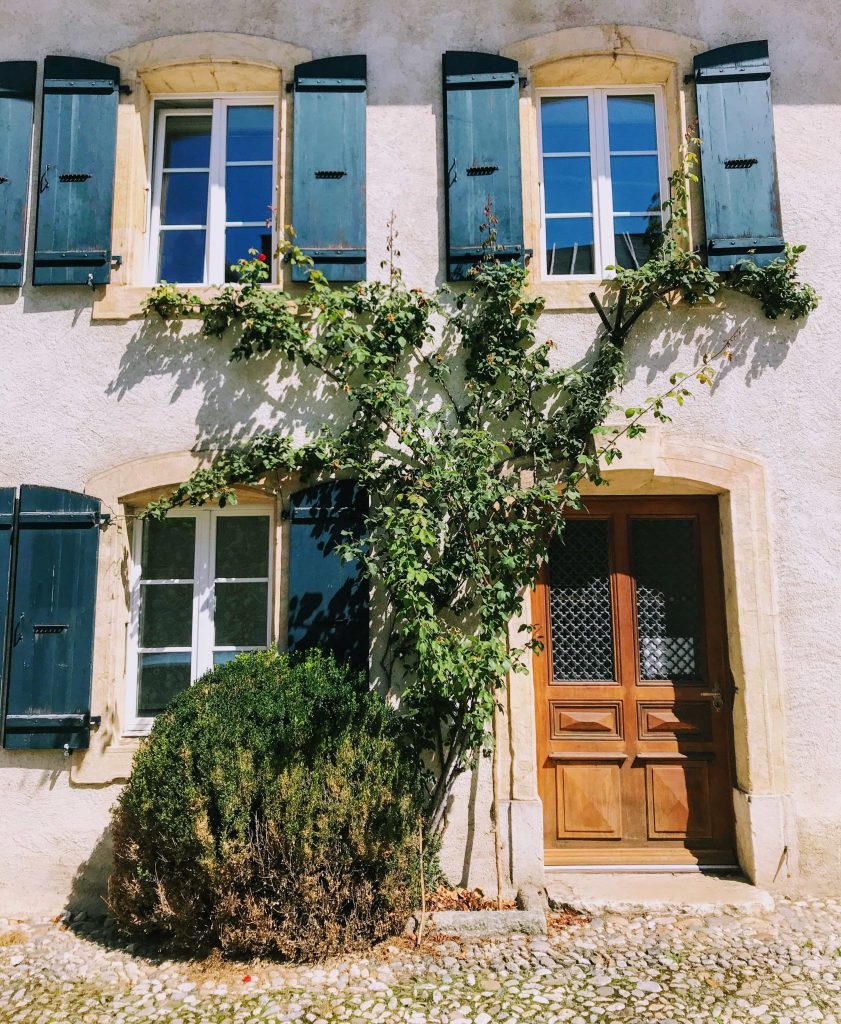 Môtiers, in the Val-de-Travers valley, is a sleepy little town with a vibrant, if slightly crumbling, appearance. Weathered houses contrast with the fresh blooms in flower boxes, vines of English ivy crawl up the walls, and even though you are still in Switzerland, the whole town has a relaxed ease that feels decidedly French. Since the ban on absinthe was lifted, Môtiers has once again become the focal point of the fée verte. In the center of town, you’ll find the “Maison de l’absinthe,” the Absinthe Museum and tasting room. Visitors can learn all about the history and production of absinthe in the three-story museum, but we were most interested in the absinthe tastings that were offered. 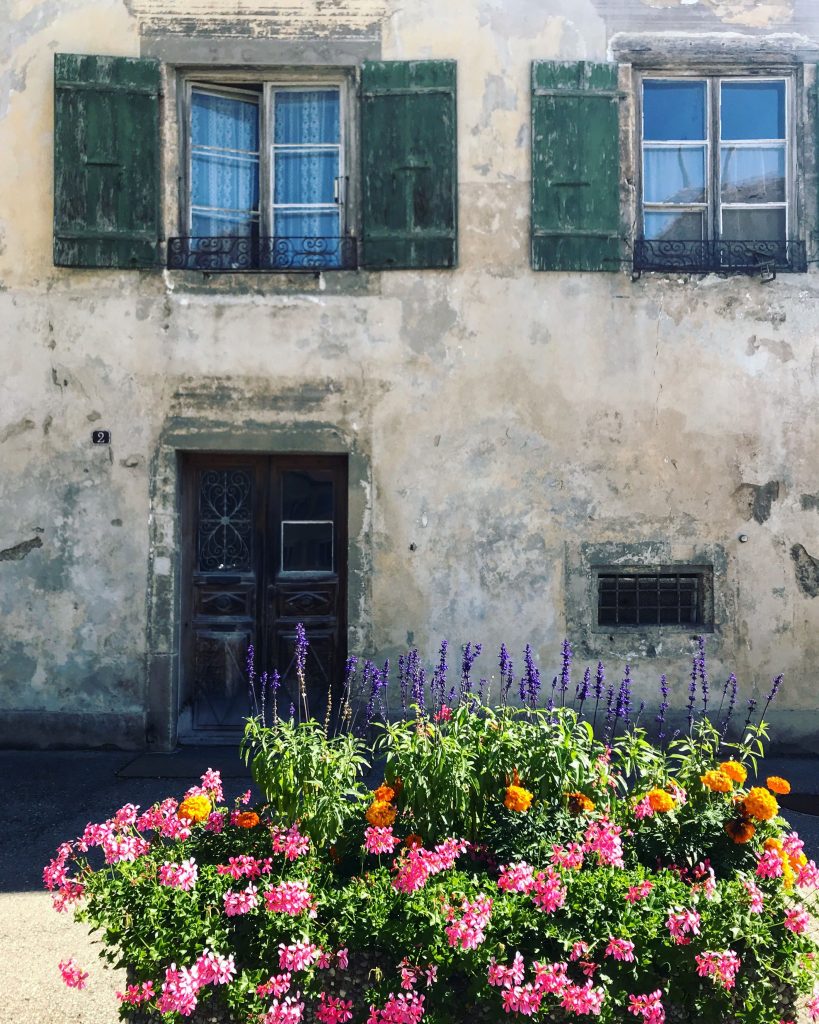 Absinthe is a distilled, highly alcoholic spirit. It’s derived from the flowers and leaves of wormwood, along with green anise, sweet fennel, and other herbs and botanicals. Some versions are nearly 75% alcohol, which makes whiskey’s standard 40% (80 proof) seem almost like child’s play. If whiskey is said to put hair on your chest, absinthe will grow you a full beard. 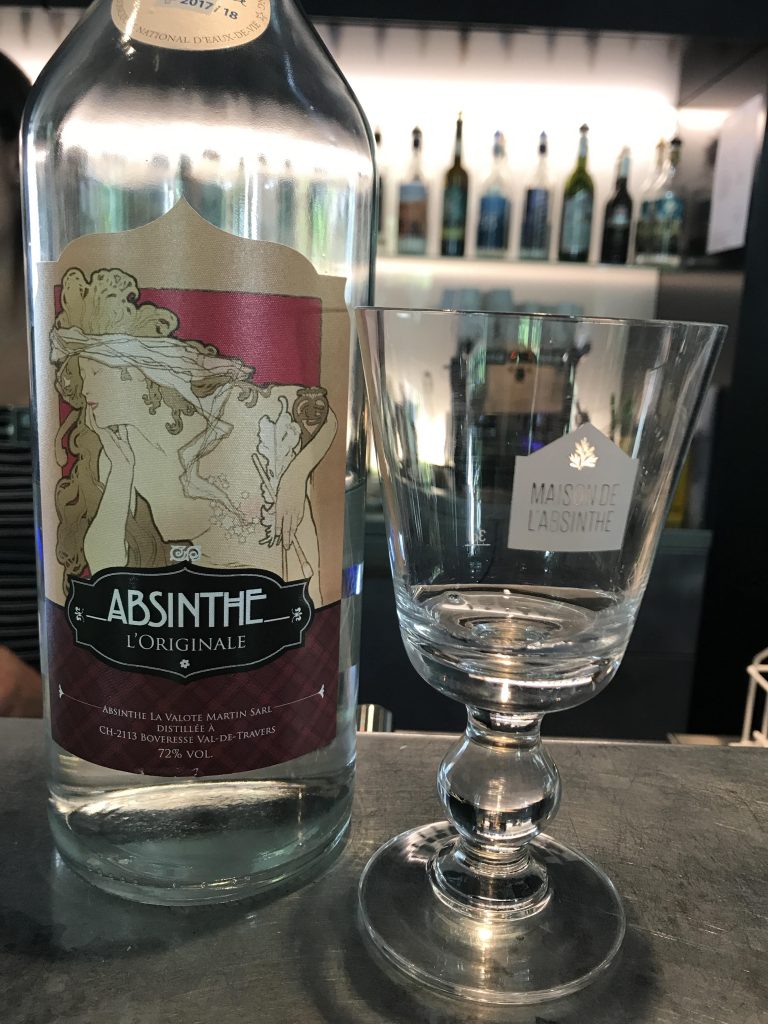 Will Absinthe Make You Hallucinate?

But contrary to popular belief (and a reason for its 95-year ban), absinthe is not psychoactive. It won’t make you see shapes or colors or the legendary green fairy. The chemical that’s taken all the blame for its hallucinogenic reputation is called thujone, which is a naturally occurring component of wormwood. Thujone is present in trace amounts in absinthe. But no matter how much absinthe you might drink, a thujone-induced delirium remains impossible; you would suffer fatal alcohol poisoning long before the thujone would kick in. And the alleged euphoric and aphrodisiac effects you might feel? That’s simply the work of the alcohol. Absinthe is a unique spirit nonetheless, with its alcohol content, herbal flavor, special preparation – and let’s be honest, illicit reputation – setting it apart from other liquors.

How to Prepare Absinthe

At Maison de l’Absinthe, we were first taught how to properly prepare the beverage. Absinthe is incredibly strong, so in order to enjoyably drink it, it needs to be diluted with ice water dripped slowly into the liquid. For certain varieties (the famed green type, for example), you are also meant to slowly dissolve a sugar cube on top using a specialized slotted spoon and more drips of ice water. As the water is added, the absinthe will start to turn a milky, opalescence color, called the louche. “Louching” the absinthe helps to release certain essences, mainly those from the anise, fennel and star anise, and the otherwise muted flavors and aromas bloom. Final preparations can vary according to taste (and tolerance!), but traditionally the final drink will contain 1 part absinthe and 3 parts water. 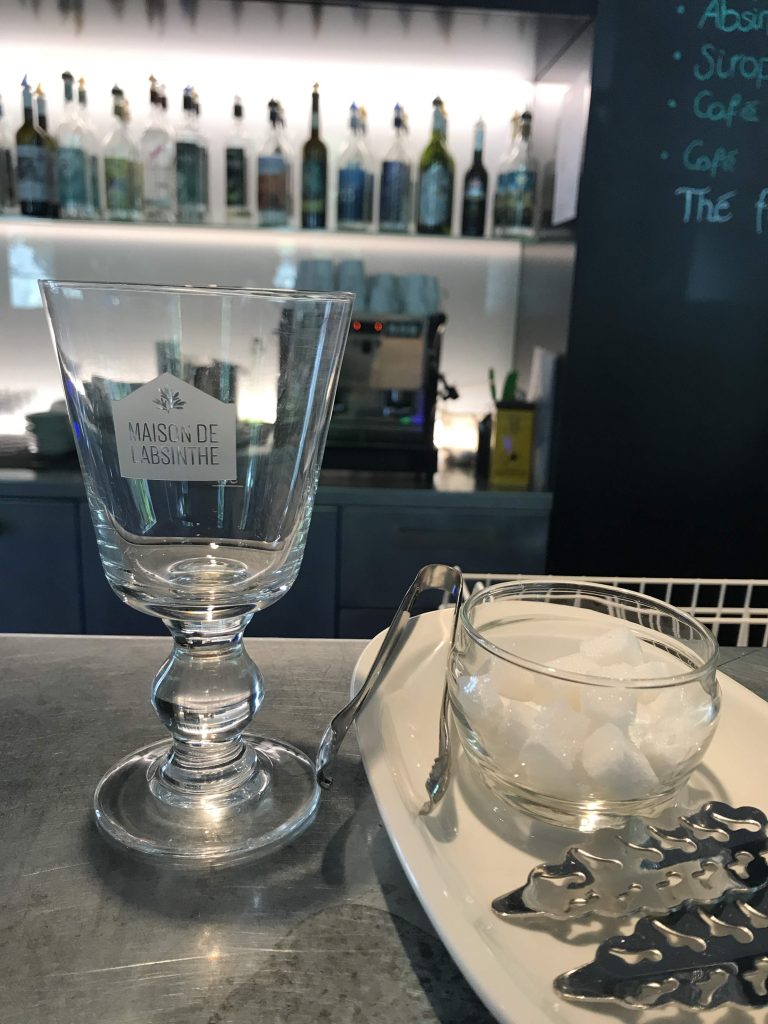 The one thing not to do? Set it on fire. You might have seen this in bars when the bartender will light a liquor-soaked sugar cube on fire and drop it into the absinthe shot. This, sadly, was the way I was introduced to absinthe way back in my early 20s, and the absinthe shot burned all the way down. Not only is this a gimmick (and possibly a fire hazard), but it destroys the unique flavor of absinthe altogether. All of those subtleties and aromas and flavors lost in a single click of a lighter. Put down the shot glass, and step away from the fire. 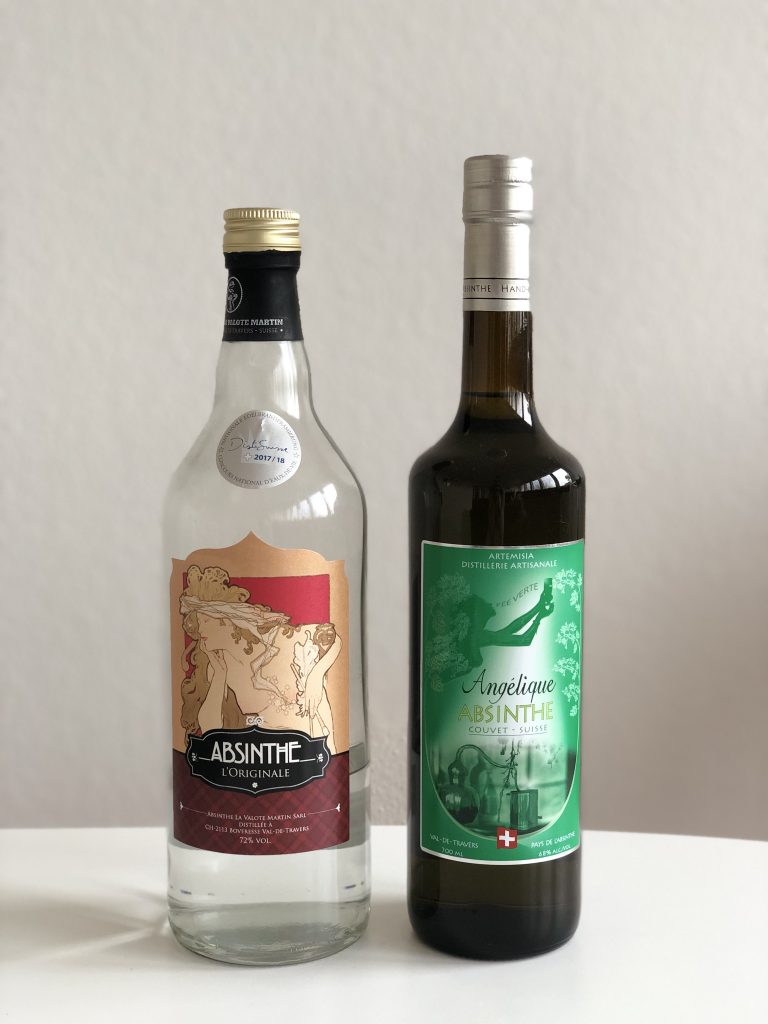 We each chose three different absinthe types to taste, two of the colorless white (Blanche or a Bleue) varieties and one green (Verte) version. Blanche absinthe has become the most popular type of Swiss absinthe in the post-ban era. Personally, I find this style the most enjoyable to drink. Verte absinthe, characterized by the green hue and more intense bitter flavor, is the more traditional 19th-century style and generally higher in alcoholic content. This is why you need the sugar to cut the taste.

Whichever type you choose, this is not your college absinthe. if you like the taste of anise or fennel, you’ll love it. When it’s properly louched, the spirit releases an herby, floral smell and flavor that is quite nice to leisurely sip. But diluted or not, that stuff is strong. Three small tastings apiece and both of us were a little buzzed by the end. That didn’t stop us (or maybe, it encouraged us) from taking a few bottles home, with the full intention of becoming super classy Europeans and having absinthe aperitif before dinner. Well, we can hope.

The nickname for this whole area of Val-de-Travers used to be “Pays de Fees” (Fairyland), and that perfectly captures the regions’ aura. Maybe it’s something in the water, but you can almost feel the spirit of Bohemia. It’s a part of Switzerland that is lush and green, with mossy forests and sparkling brooks. And if you look closely enough after an absinthe tasting or two, you might just catch a glimpse of the fairies after all.

On The Trail with Pimsleur

If you’re inclined to explore the Absinthe Trail, take Pimsleur with you!  Our easy and portable lessons on the go are offered in French, Swiss German, and 49 other languages!