When you think about Japan, what comes to your mind? Sushi, samurai, geisha, bullet train, perhaps manga and anime? Manga (マンガ) are comic books and graphic novels created in Japan or in the Japanese language. Anime (アニメ) are animated cartoons and are often based on manga. Japanese manga and anime culture appeal to people both in Japan and foreign countries. Many popular manga and anime have been translated into other languages and have become popular all over the world. If you spend most of your free time reading manga, watching anime or doing things related to manga and anime such as cosplaying, collecting figures, and playing games, you might be one of those otaku (オタク), often translated as hardcore fans or “pop-culture nerds.”

Today, let’s put the spotlight on manga. Manga culture is categorized as pop culture, however, its history goes back to the 12th century. It has been said that Choju-jinbutu-giga (鳥獣人物戯画), known as “The Scrolls of Frolicking Animals” in English, which is a set of four picture scrolls of animals such as rabbits and frogs, is the oldest manga. The creator is unknown but it is believed that more than one artist created the work. In Choju-jinbutu-giga, you can see some drawing techniques that are still used in modern manga.

During the Edo era (1603-1867), as printing technologies developed, works started to be sold to the masses and became a popular cultural artform. During the late Edo era, Hokusai-Manga (北斎漫画) emerged.  Hokusai is one of the most famous artists in the genre of ukiyo-e (浮世絵, “The Floating World”), which depicts everyday life. It was around this time that the word manga started being used.

In kanji (Chinese characters that are used in the Japanese writing system), the word manga is composed of two characters: 漫 “man” and 画 “ga.” The first kanji, man, means “whimsical,” and the second kanji, ga, means “pictures.” From the late Edo era through the Meiji era, and during World War II, foreign comics and cartoons were brought to Japan and influenced the manga.

Soon authoring manga became recognized as a profession and many successful manga artists, called manga-ka (漫画家), emerged, such as Osamu Tezuka, known as “the god of manga,” whose most famous work is Tetsuwan Atomu (鉄腕アトム, “Astro Boy.”) 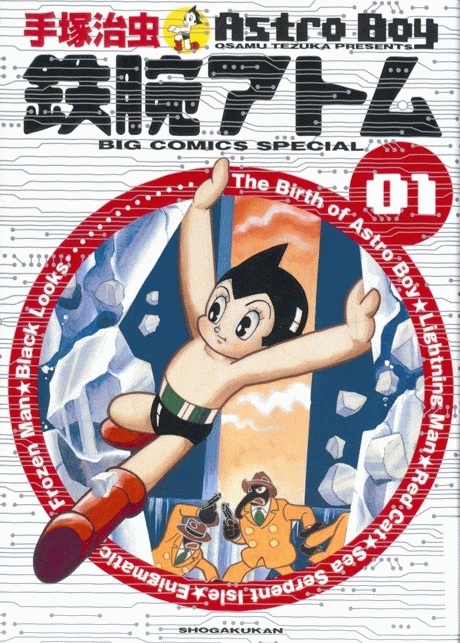 As a native Japanese person who grew up in Japan, I have read many manga in my life. I mostly read Shojo manga (少女マンガ), “manga for girls,” when I was in elementary school through high school. Some common themes of Shojo manga are romance, school life, and fantasy. As you can see from the word Shojo, “young girls,” this genre is aimed at school-age girls.

There is also Shonen manga (少年マンガ), aimed at Shonen, “young boys.” You might have seen some Shonen manga such as “Dragon Ball,” “Naruto,” “One Piece,” “Attack on Titan,” and “Death Note.” Common themes of Shonen manga are adventure, action, and fighting.

Examples of other genres are Seinen manga (青年マンガ, “manga for youth”), Gyagu manga (ギャグマンガ, “gag manga”), Supokon manga (スポ根, “sports manga”), Horaa manga (ホラーマンガ, “horror manga”), and Kyooiku manga (教育マンガ, “educational manga”). There are even genres of manga that are aimed at different generations. Manga has something for everyone, which is one of the main reasons why it is so popular.

Where to Buy Manga

There are mainly three different ways to purchase manga in Japan:

If you have any specific manga work in your mind, either (1) or (3) is recommended. The average price of a new independent manga book is between 400 and 600 yen. You can buy manga more cheaply at used bookstores. There you will find discounted books, sometimes for half the original price and sometimes for only 100 yen! Also, it is possible to read manga books at used book stores by doing tachiyomi (立ち読み, “reading while standing”).  The used books are not sealed, unlike the nicely sealed new books at the book store.

If you would like to sit, relax, and read manga while having drinks, you should go to a manga kissa (マンガ喫茶, “manga cafe”), often called mankitsu. You can enjoy mankitsu for three hours for about 1,000 yen. Electronic manga books are sometimes less expensive than printed manga books.  They are also easier to carry – they don’t take up space! What I like about (2) is that you can read many manga by various writers in one magazine. The average price is between 400 and 700 yen. Some monthly manga magazines come with gifts such as small bags and stationery, especially Shojo manga and Shonen manga. I used to get a monthly Shojo manga magazine, discover favorite manga, and then buy independent books after the end of the magazine series.

Learn about Japanese Culture through Manga

Manga is a form of entertainment, but you can actually learn a lot about Japanese culture and language from it. As mentioned, manga covers various topics. You can learn anything from world history to modern school life and work life to how to cook Japanese food!

You can even learn about some Japanese traditional culture. A few years ago, the manga Chihayafuru (ちはやふる), which is about students who play a competitive version of the traditional Japanese card game Hyakunin Isshu (百人一首), known as Kyoogi Karuta (競技かるた), became a hit. There were spinoff movies starring popular young actors. Now more people are playing Kyoogi Karuta and visiting the shrine where the annual Kyoogi Karuta competition is held. Other examples are Hikaru-no-Go (ヒカルの碁), where the main character plays Go (碁), an abstract board game that originated in ancient China, and Barakamon (ばらかもん), where the protagonist is a Shodoo (書道, “calligraphy artist.”) These games, arts, places, and people have been playing a big role in luring foreign tourists to Japan.

Young people aren’t the only ones reading manga. In Japan, it is socially acceptable for adults to read manga as well. There are life lessons in manga about such things as friendship, relationships, jobs, marriage, and overcoming life’s difficulties.

A word about language.  Manga is easy to understand even if your Japanese language skill is not at the level where you can understand everything in the text.  There are plenty of pictures and the sentences are shorter and simpler than in a regular book. The sentences often have furigana, which shows how to read kanji, since readers of manga range from children to adults. Also, you will see a lot of Japanese onomatopoeia, which imitates the natural sound of a thing or indicates the sound of an action. For example, a dog barks “woof-woof,” “arf-arf,” or “ruff-ruff” in English, while it is “wan-wan” in Japanese. When you feel your heart beating fast due to nervousness or excitement, we describe that as “doki-doki.” When your heart is beating even faster, we say “baku-baku.”

In addition, there is a lot of so-called role language, which are sets of spoken language features and phonetic characteristics psychologically associated with particular character types, and they are used to describe manga characters uniquely and vividly. For example, there are many forms of “I” in Japanese depending on whether you are male or female, young or old, rich or poor, masculine or feminine. Some role language is not widely used in actual daily conversation, but from it, you can learn about social and cultural stereotypes in Japanese society, and perhaps use it to express yourself in Japanese.

Manga may seem like just a form of entertainment, but it actually has much to offer. If you are interested in learning about Japanese language and culture why don’t you start with manga?

Have you always wanted to speak Japanese? Start today with a one-week free trial subscription. After your FREE week trial, your subscription allows you to continue on your way to fluency for just $14.95/month. This simple Pay-As-You-Go subscription offer gives you access to ALL Japanese lessons at that price.