The Fourteenth of July: Storming the Bastille and French National Day!

History of Bastille Day – Why do the French Celebrate the 14th of July?

This day marks the birth of the French Republic and was instituted as a jour férié (holiday) in 1880. The significance of July 14th is twofold. First is “La prise de la Bastille” (The storming of the Bastille) which occurred on July 14, 1789. The Bastille was a royal prison seen by the working class as a symbol of the absolute and arbitrary power emanating from the king. Revolting against this tyranny, the Parisian people besieged the prison. The rebellion marked the end of the Ancien Régime, and the beginning of la Révolution française (the French Revolution), which had an enormous impact both on France and on Europe as a whole.

This date also marks the Fête de la Fédération (Festival of the Federation). On July 14, 1790, the first anniversary of the Bastille rebellion, French deputies, as well as King Louis XVI, gathered in Paris to commemorate the revolution and celebrate France’s new representational government, the constitutional monarchy. This celebration was a historic moment of reconciliation and unity for the French people.

These two events still influence French society. The French are proud of this moment in their history that led to the famous motto “Liberté, Egalité, Fraternité.” So, two events are celebrated on Bastille Day!

How to Celebrate Bastille Day in France

On the 14th, French people give themselves over to vacation or leisure activities. In Paris, the most famous event is the défilé militaire (military parade) that spotlights the different military regiments and police forces.  Organized by the Ministry of the Armed Forces (Ministère des Armées), the parade starts at 10am on the avenue des Champs Elysées and goes down from the Place de l’Etoile to the Place de la Concorde. Hundreds of thousands of spectators arrive early in the morning hoping to see the French President going down la plus belle avenue du monde (the most beautiful avenue in the world). Military flyovers open and close the event. Every year, a different country’s army is invited to march alongside the French army.

The parade is broadcast on TF1, the first French TV channel. At the end of the parade, the president shares his vision for the year. In past years artists, politicians, and special guests were invited to a garden party in the Presidential Palace, l’Elysée, however, it was abolished in 2007 because of cost.

While this défilé is a one-of-a-kind, some French antimilitarist artists have denounced the spectacle. The singer Georges Brassens, in his iconic song La mauvaise reputation, released in 1952, sang:

(The day of the fourteenth of July, I stay in my cozy bed, Music marches to the beat of boots, This is no concern of mine).

Le 14 juillet also offers a wide range of lesser-known activities. If you are in Paris that day, don’t miss the opportunity to attend a play at the state theater, Comédie française. C’est gratuit ! (It’s free!). Each year, a different play is performed and the repertoire ranges from Shakespeare to Feydeau. At 2pm, this famous French institution opens its doors to the public. It’s a great chance to immerse yourself in the very historical Richelieu room, but you can’t reserve tickets. Make sure to arrive early and get in line for a seat because…premiers arrivés, premiers servis…(first come, first served). At the end of the performance the actors gather and sing La Marseillaise, the French national anthem, on stage.

Because the weather can be very hot in July, in the afternoon feel free to visit and enjoy a picnic in one of the many parks that Paris has to offer. For example, check out Le Parc des Buttes-Chaumont or Le Parc Montsouris. 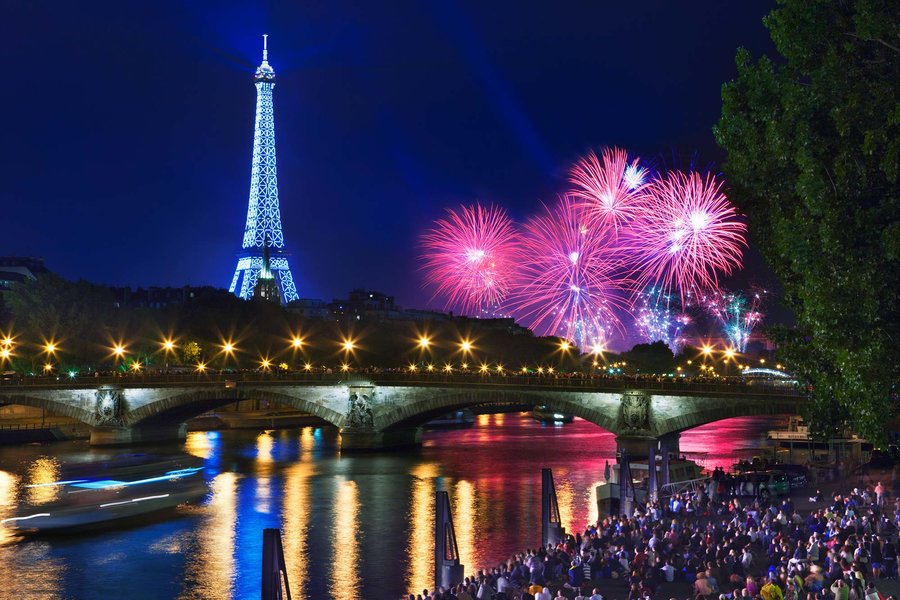 French people have a holiday from work on July 14th and will start celebrating the night before. Traditional feux d’artifice (fireworks) displays organized by many villages and cities are the highlight of the evening. The most beautiful and well-known feux d’artifice happens in Paris on the 14th on the Champ de Mars, in front of the Tour Eiffel.

Villages, associations and town halls sponsor dinners, concerts, and other entertainment. Everyone is welcome. Music and dancing continue well into the night.

In larger cities, fire stations open their doors to the public and host le bal des pompiers (firefighters’ ball). The event is free of charge and very popular. Revelers dance until early in the morning. Some fire stations are open on the 13th while others welcome people on the 14th.

If you want to know more about la Comédie française:

What to see in Le Louvre:

Take Pimsleur French With You for Bastille Day Festivities!

For French lessons on-the-go, download our research-backed Pimsleur French course on your tablet or smartphone to advance your French skills while you travel.