Korea is a remarkably clean and tidy country. Taking the subway in Seoul early on a Saturday morning, we came upon a cleaning crew diligently scrubbing the floors in one of the long, underground walkways, using long water hoses to flush away dirt and debris as they worked.

I’d venture to say that the surfaces of many American subway platforms (say, Boston or New York) have not been thoroughly cleaned in decades … if ever?

Continuous cleaning is not just limited to the Korean subway system — If you wander about in the multi-story department stores, you’ll have to step around the sweepers who meticulously ensure that not a speck of dust remains on the gleaming floors.

Perhaps such habits of cleanliness start at home, in Korean bathrooms, where multi-functional “intelligent” toilets reside. But the visiting tourist has to be careful — the toilet might be smarter than you!

If you’ve ever been stymied by incomprehensible icons on a computer screen, just wait until you’re faced with a tiny little panel on the bathroom wall with indecipherable, but colorfully illustrated, buttons.

BE CAREFUL WHICH BUTTON YOU PUSH 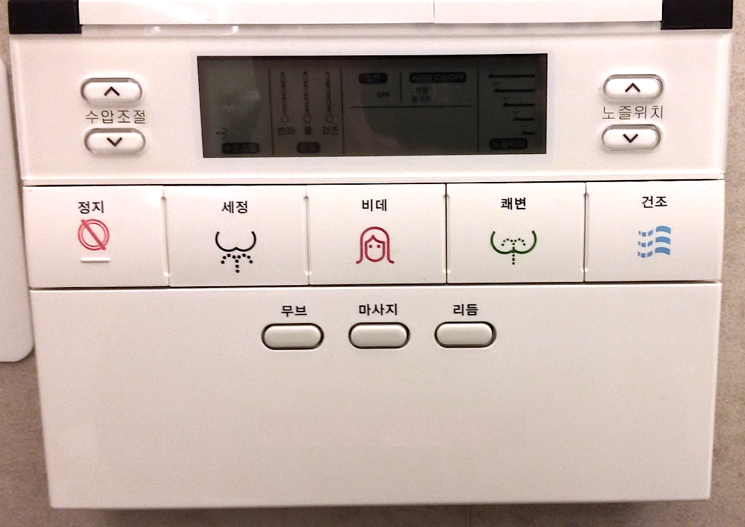 Toilets are pretty simple to operate, right? In the U.S. there’s usually a handle to flush, while some in Europe have a button to push.

Let’s just say that if you miss seeing the handle and end up pushing the wrong button, you may need to be quick in closing the lid to avoid getting sprayed unexpectedly.

What’s even better, however, is the intelligent toilet that flushes automatically when you get up. Though, how does it know? And what else does it know about you?

HAPPINESS IS A WARM FEELING

Best of all is the adjustable warming seat. Just be sure that you understand the controls and have set the temperature appropriately.

One funny thing is that apparently the predominant brand of intelligent toilets in Korea is — American Standard.

It’s interesting how ideas may develop in various geographies, yet seldom, or never cross national boundaries, even when manufacturers and suppliers are transnational.

DID YOU KNOW? South Korea has not one but two toilet theme parks dedicated to potty culture! The videos below will give you a glimpse into why Koreans are so obsessed with all things poo.